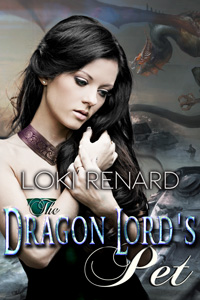 When eighteen-year-old Lilly enters the Dragon Realm for the first time after years of training under the watchful eye of her outcast father, she immediately seeks vengeance against the ruler who banished him. To her shock and dismay, however, her plan is easily thwarted by the king’s most trusted ally, High Lord Vitomir, and Lilly soon finds herself stripped bare and helplessly restrained as she is interrogated and punished by her stern, handsome captor.

To atone for her crime, Lilly is given to Vitomir to be corrected and trained, and he quickly sets about teaching his new pet her place. She is made to wear a collar and tail, kept naked and on display in a cage, and punished in the most shameful ways imaginable whenever she dares to defy her new master. But despite everything, Lilly cannot deny her body’s response to Vitomir’s firm-handed dominance, and when he claims her at last she is left utterly spent and satisfied.

As she learns the truth about her father’s treachery, Lilly begins to realize the extent to which she has been lied to throughout her life. But when his scheming threatens to reignite the war between men and dragons, will Lilly be prepared to do whatever is necessary to stop him?

Publisher’s Note: The Dragon Lord’s Pet is a stand-alone book which is the fifth entry in the Dragon Brides series. It includes spankings and sexual scenes. If such material offends you, please don’t buy this book.

Vitomir stood back, took stock of the situation. She was beautiful. That shouldn’t have been the first thought in his head, but he could hardly help it. Those passionate eyes spitting hate right into his. He remembered how her lithe body had felt writhing against him. Her anger made her quite stunning. He wondered what she would look like in more peaceful circumstances.

She smirked, but she did not answer him.

“You look young to my gaze,” he said. “Maybe too young to know what can happen to a girl in the company of an angry dragon.”

“I’m eighteen,” she growled, clearly goaded by his assumption of youth. “I am a grown woman.”

“Grown woman?” Vitomir snorted, watching as fresh anger flared in her eyes. This little human fancied herself far more mature and powerful than she was. He wondered who had convinced a mere eighteen-year-old that she was a force to be reckoned with. Whoever it was had done her a great disservice. Still, her claim to maturity did make certain treatment a possibility.

He pushed her legs apart, the chains of the shackles providing more than enough room to bare her slit. She tried to close her legs, but it took no effort to hold them apart.

“Oh, no,” he tutted as he felt her weak struggles. “You’re a grown woman. A grown woman who must understand what being a prisoner means. You have no agency over your body. You are flesh to be touched, punished, taken as we see fit. When you set your blade at the king’s head, it was your body you surrendered.”

Her face flushed quite beautifully, the blue of her eyes all the more striking. They were locked on him with a maidenly uncertainty that made him quite certain she had yet to experience all being a grown woman truly entailed.

“Your name, girl,” he demanded again.

When she did not speak, his palm swept between her thighs, caught her pouting lower lips in a swift slap, which finally had some effect. She threw back her head with a shocked gasp and cursed profusely at him.

“I very much doubt ‘Fucking Asshole’ is your name,” he drawled. “Do I need to repeat the treatment, with some leather and oil to heighten the effect?”

She was totally helpless. She knew it. And yet she was resisting him. It wasn’t because of a lack of fear. He could see that in her eyes. It was something else. She must be more worried about someone else than she was about him. He would have to change that.