The Dragon’s Captive by Loki Renard 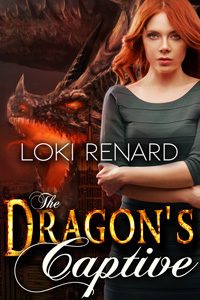 Graduate student Kate Ferrier has been obsessed with dragons for years, but when she manages to construct a portal and enter their realm she is promptly captured by Vilka, a powerful dragon lord who, like the rest of his kind, can also take the form of a huge, handsome man. Believing that she could not have reached his world without help and wanting to know who sent her, Vilka decides to interrogate Kate in the most intimate, humbling way imaginable.

Stripped bare, spanked thoroughly, and put on shameful display, Kate finds herself quivering with desperate desire as her naked, helpless body is tormented with pleasure more intense than she would have thought possible. Soon she is blushing crimson as she begs her stern, handsome captor to take her long and hard, and when Vilka claims her at last she is left utterly spent.

Though a part of her delights in wearing Vilka’s leash and collar, Kate is not ready to spend the rest of her life as his captive. Determined to get herself home, she sets about creating another portal, but to her horror her efforts inadvertently awaken an ancient beast of immense power. With everything they love in peril, Kate and Vilka are forced to work together, but can they stop the terrifying creature before it wreaks unimaginable destruction on both of their worlds?

Publisher’s Note: The Dragon’s Captive is a stand-alone book which is the second entry in the Dragon Brides series. It includes spankings and sexual scenes. If such material offends you, please don’t buy this book.

He unwound the gag from her mouth to allow her to speak, and immediately regretted it.

“You want another dose of discipline, girl?”

She fell into a disgruntled silence as he opened the doors and led her back into his chambers. Once again, aside from the missing sheet she’d decided to wear, nothing had been disturbed. It was almost as if she’d managed to walk through the wall.

“I didn’t think so,” he said, opening the doors and walking her back through. It was pretty obvious that doors alone couldn’t hold his mate, so he was going to have to take extra precautions to secure her. First things first, he took her to the bed, got her to lie down on her back—which wasn’t the most comfortable position for her to be in. It made her sore bottom press against the bedding, but the ties at the corners of the bed were still there and it was the work of a minute to secure her the same way he had the previous day, spread-eagled and blushing beneath him.

“I reckon this might be the only way to keep you in one place,” he said, standing over her. “What do you think?”

“You lack the education and intellect to understand what I think,” she shot back, arrogant and angry. “How fucking dare you.”

“Easy there,” Vilka said. “Don’t let that temper of yours get the better of you, Kate. You got punished like anyone else would be punished. I don’t tolerate disrespect among my ranks, and I will not have my mate disrupt my plans and disrespect me in front of my men. You got lucky.”

“How exactly did I get lucky?”

“I could have done a lot more than whip your butt in front of them,” he said. “I could have had you service me with your mouth, your pussy, or even that tight little hole between your cheeks.”

“That’s right,” he said. “There’s no limit to what I could do with you, so you’d better thank me now for being so lenient—before I change my mind.”

“You lie there,” he said. “And I know you’re going to be thinking about how to get out of here, but try to spend a little time thinking about why you’re tied to the bed with your bottom marked with my lash. Try learning something from this, Kate, so I don’t have to do it again.”

She bit her lower lip angrily, but managed to keep her mouth shut. Maybe she had learned something.

2017-06-11
Chris
Previous: Conquering His Mate by Claire Conrad
Next: His Little Earthling by Katie Douglas