The Dragon’s Pet by Loki Renard 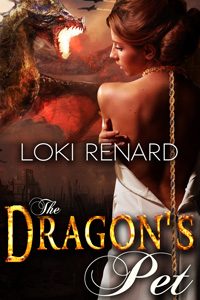 When her plane goes down near the front line of the ongoing war between humans and dragons, Aria comes face to face with one of the enemy, and then the terrible beast transforms before her eyes into a huge, devastatingly handsome man. Taken captive and brought back to the dragon’s lair, she quickly discovers that he intends to keep her as not only his prisoner, but his pet.

Her captor wastes no time in stripping her bare, placing a collar around her neck, and putting her shamefully on display. Aria’s attempts to escape are sternly punished, but even with her cheeks blushing and her bottom burning both inside and out, she cannot hide her helpless arousal as her new master takes her hard and thoroughly, enjoying her beautiful body in every way he pleases.

After she learns the truth about the cause of the war, Aria is forced to question everything she was taught, and soon her former enemy has claimed her heart as completely as he has conquered her body. But when the need arises, will she do what she must to protect the one she loves, even if it means being branded a traitor to her own kind?

Publisher’s Note: The Dragon’s Pet includes spankings and sexual scenes. If such material offends you, please don’t buy this book.

“She has no fangs and bites anyway,” someone said. “There is no taming these beasts. They fight to their bitter ends.”

Vyktor’s composure did not waver. He stopped rubbing and started spanking her again, not as hard as the single slap that had made her scream, but hard enough to sear her bottom, hard enough to get her attention and make argument impossible. Hard enough to turn the flesh of her cheeks to an aching mass while he had a firm grip on the back of her neck.

Instead of making his punishment more painful, he simply made it more intense. He made it so that her entire body was consumed with his will. His palm landed and every part of her responded, bolts of sensation arced through her and the heat that was suffusing her bottom soon began to sink deeper and find her sex.

“There,” Vyktor said, putting his hand under her chin and turning her flushed face to the crowd. “See how pink her cheeks are, how her eyes sparkle with desire.” His hand ran down her body, pinching her left nipple lightly. “See how every part of her is responsive, the little buds of pleasure flowering on her, one on each breast and a third down here.”

Aria let out a moan as his palm ran over her belly and found her pussy and then his fingers pinched her clit, making her buck against her chains.

“Humans are awash with erogenous zones,” Vyktor said. “The side of the neck, for instance…” He let his teeth trail lightly over the skin where her neck met her shoulder, and then up to her ear. Aria shuddered softly, grinding her hips against his hand.

“There are so many ways to ensure their compliance,” he said as he lifted his head from her. “Killing them is not only unnecessary, it is unimaginative.”

He continued to massage her pussy until her juices slicked his hand and flowed down her inner thighs. He was working her into a frenzy, taking the natural responses of her body and using them to create a state that made her want just one thing—to be filled in that tight little space between her legs.

“Fuuucck,” she moaned softly, not wanting to make a sound and yet unable to stop herself. Her bottom still burned, but that didn’t matter somehow anymore. It didn’t even feel bad anymore. The prickling, stinging, aching heat served to make her even more aroused.

The dragon walked in front of her, depriving her of his touch for a moment. He looked her in the eyes with those golden catlike orbs of his, reached out, and slowly but surely slid a finger into her pussy.

Aria’s gasp hit a high note of desire as her captor swirled his finger slowly.

2017-04-09
Chris
Previous: Her Marine Rancher by Dinah McLeod
Next: Shared by the Doctors by Samantha Madisen