The Duke’s Pet by Lily Harlem 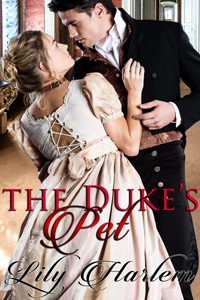 Penniless and with no prospects for marriage, twenty-one-year-old orphan Jemima Cooper has no choice but to take any work she can find, no matter how shameful. When she is sent by her employer to serve the Duke of Hillcrest, however, Jemima is surprised to discover that the handsome, eccentric nobleman intends to make her not merely his concubine but also his pet.

Within moments of her arrival at the duke’s home, Jemima finds herself purring like a kitten as a collar is placed around her neck, and it isn’t long before she is blushing crimson and trying to hide her helpless arousal as she is led through her new master’s estate wearing nothing but a tail.

Though the duke soon proves more than ready to bare his beautiful pet’s bottom and spank her firmly for any disobedience, his stern dominance only increases Jemima’s need for him, and when he takes her in his arms and claims her properly it is better than she could have ever imagined. But will she always be just the duke’s pet, or will he one day make her his bride?

Publisher’s Note: The Duke’s Pet includes sexual scenes and spankings. If such material offends you, please don’t buy this book.

Her ass felt vulnerable, the way it had when he’d tipped her over his lap the day before—bare, defenseless, and exposed.

She tried to calm the tremor in her belly that stretched downward, between her legs and to her pussy.

“Now you must try and relax for this bit, little kitten,” he said, his voice softer again. “Do you understand?”

He ran his fingers down her spine slowly, tracing each vertebra. When he reached her behind he smoothed over each globe of flesh, tracing the area of heat he’d created the day before.

She stared out of the window, seeing the stretch of lawn and the tree line but barely registering it. Her buttocks were taut, her legs braced, and her spine stiff.

“I demand of you, relax,” he said, his voice was sterner again.

She snatched in a breath then blew it out slowly, willing the tension to leave her body. She visualized it breezing from her on the air, leaving her a slumped form over the desk. She was helpless yet willing now, and she also had to trust him.

“That’s it, you’re doing so well.” He reached for something else out of the drawer. “You have such a dear little bottom,” he said. “So soft and smooth.”

Jemima didn’t know how to respond to that compliment so she said nothing.

“And now the blush from your spanking has faded it’s beautifully pale again too. It’s like freshly drawn milk.”

He tugged her left cheek outward.

She curled her toes on the rug and clenched.

“No.” A sharp stinging slap landed on her rear.

“Ouch!” She jerked forward, her hipbones bumping on the wood.

Oh, but it was hard not to. He’d exposed her most private hole and was obviously looking right at it. Cool air washed over her intimate flesh, slipping to her pussy.

“Widen your stance.” He tapped her foot with his boot.

She did, a fraction.

“More,” he snapped, again tapping her with his boot.

She gulped and obeyed despite it being against her instincts.

“That’s it.” He ran his hand down the shallow cleft of her buttocks. When he reached her asshole he stopped.

“Sir!” She raised her head, her neck arching.

“This is where your tail will go, little kitten.” He applied pressure to the center of her pucker.

“Please God, no, not there.” Her eyes were wide and unblinking. Her heart rate picked up. Was he serious?

“Yes, here.” He eased his cool fingertip into her.

2019-07-13
Chris
Previous: Primitive: A Dark Sci-Fi Reverse Harem Romance by Piper Stone
Next: The Most Shameful Game by Emily Tilton