The Duke’s Prisoner by Kallista Dane 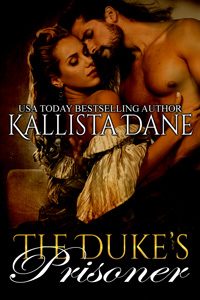 Lady Arabella was only hoping for a little adventure when she persuaded her maid to take her place at a dinner party so she could explore Venice’s famous Carnevale in defiance of her father’s wishes, but then she came home to find her father murdered and her dream turned into a nightmare. To make matters worse, Arabella herself is accused of the crime and after a poor excuse for a trial she is condemned to the notorious prison of the Duke of Venice.

Just as despair threatens to overtake her, salvation appears in the form of Nicolo Sorenzo, the handsome young nobleman who spanked her soundly and then brought her to a shameful climax the previous night at the Carnevale. With the aid of a powerful government official, Nicolo has arranged for Arabella’s release from prison, but the official’s help comes at a high price.

In return for her freedom, Arabella will be required to pose for a series of scandalous paintings by Nicolo’s mentor, a renowned artist. Each day, she will be stripped bare so that her helpless, virgin body may be teased unmercifully until she is left quivering with desire. Her wantonness will then be punished sternly, leaving Arabella with her cheeks blushing, her bottom burning, and her womanhood aching to be filled as her ordeal is captured on the artist’s canvas.

Before long, however, Nicolo has fallen in love with Arabella, and his need for her becomes irresistible. Can he unravel the mystery of her father’s death and clear her name, or will his decision to claim her as his own cost them both their freedom or even their lives?

Publisher’s Note: The Duke’s Prisoner includes spankings and sexual scenes. If such material offends you, please don’t buy this book.

Nico sat down on the side of the bed and patted his thighs. “Come here and lie across my lap for your spanking.”

She blushed a becoming shade of scarlet and her feet seemed suddenly glued to the floor.

“I said come here,” he growled.

Wringing her hands together, she took a few unsteady steps toward him, like a condemned man heading to the gallows.

“Don’t make me tell you again.”

She crossed the rest of the room and stopped in front of him, head down, refusing to meet his eyes.

“Place yourself over my lap.”

Awkwardly she draped herself across his knees. Enjoying the sight of her there, knowing what was to come, he prolonged the moment, running a hand lazily down over her skirt to one stocking-covered ankle. “Why are you being punished?”

“Because… because I wanted to do something naughty.” Face buried in the mattress, her voice was barely a whisper.

“You were bold and brazen,” he declared. “You’re a virgin, yet you want to kiss my cock, take it in your mouth, and make it swell and throb with need. That’s a very naughty thing to do. A man would barely be able to restrain himself from ramming his stiff prick deep inside your pussy after you did that.”

“Oh!” She twisted to look up at him, shocked at his rough language. “I’m sorry, Sir. I didn’t mean to tempt you into breaking your word. I only wanted to please you.”

“If you want to please me, reach back and pull up your skirt. Then tell me you’re sorry for teasing me like a shameless wench and ask me to spank your ass.”

Hands shaking, she slowly hiked up her skirt until it was bunched around her waist. He looked down at the quivering globes of her rear and groaned. He’d done his best to sound stern with his warning about tempting a man, but now that she lay across his lap, baring herself to him, he realized the truth in his statement. It would take every ounce of self-control he had not to wallop her good and hard, then roll her onto her back and plunge his rod into her velvet heat.

“I’m sorry, Sir. I deserve to be punished for teasing you thoughtlessly. Please spank my… my…”

His hand cracked down and she jerked away.

“You will not move,” he ordered. “Not until I give you permission.”

She lowered herself back over his thighs. He could feel the heat of her mound resting on the bulge in his groin. He smacked her again, hard, then ground himself into her. She wriggled, rubbing instinctively against his stiff rod.

The move nearly made him lose control. His cock ached to bury itself in her soft wet heat but honor would not allow him to break his vow. For now, he’d feed the hunger building inside by turning her pert bottom an enticing shade of scarlet. Then he’d give his eager pupil a lesson in how to ease the fever she’d ignited.

2017-01-21
+admin
Previous: The Doctor’s Command by Loki Renard
Next: His Feisty Human by Ivy Barrett