The Duke’s Proposal by Chula Stone 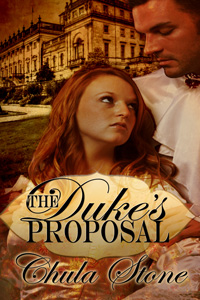 Sophia Tamworth never planned to marry, having chosen instead to look after her aging father and assist her brother in the running of the family estate. Then Spencer Preston, the duke of Page, came to court her sister…

Spencer tired long ago of the frivolities of London high society and a marriage to Dorothy Tamworth, agreed with her father before his passing, seemed like the perfect arrangement… until he met her sister. Sophia intrigues and excites him, and he cannot help but imagine her sharing his bed as his wife, and sharing it often. When he learns that Dorothy has fallen in love with another man and does not wish to wed him, he offers Sophia a proposal.

Although she is shocked by the duke’s offer of marriage, Sophia sees no other way to help her sister avoid a scandal, and she reluctantly accepts. She quickly discovers, however, that her new husband is a man to be reckoned with, and that her attempts to manipulate him have a good chance of ending with her lying over his knee for a bare bottom spanking.

Her duties as a wife initially fill her with trepidation, but Sophia soon finds that the duke can be as patient as he is passionate and as gentle as he is firm. More disturbing still is the fact that, if she is not careful, Sophia fears that she may soon fall deeply in love with her husband.

Publisher’s Note: The Duke’s Proposal contains both consensual and non-consensual spankings of an adult woman, including domestic discipline in a Regency era setting. If such material offends you, please don’t buy this book.

He was spanking her! How dare he? She was the daughter of an earl! Yet here she was, bent over her husband’s knee, her bare bottom turned toward the roof. She let out a yell of protest. “Stop that! Stop that at once! I demand that you stop!”

“If you don’t want the whole county to hear you being punished like the headstrong, stubborn little wife you are, you’ll tame that tongue of yours.”

“But you’re hurting me!” Surely this would make him stop. No gentleman would ever hurt a lady.

“I’m glad. I mean this spanking to hurt. Maybe now you’ll listen to me next time I give you an instruction.” He carried on with his hot stinging swats, all over her tender backside.

The heat was building to an unbearable degree. “Ouch! Ouch! Stop! You can’t do this to me!”

That comment wrung a wry chuckle out of him, but didn’t win her any relief. She tried to escape the sting, but the way he was holding her and the small confines of the carriage meant that she was thoroughly trapped, helpless to get away. “Obviously, that statement is erroneous, but in case you need convincing, perhaps I should increase the pace of this lesson.”

She had thought it was impossible for him to spank any harder, until he did. She assumed her bottom hurt as badly as it could, until the pain increased. She let out a shriek that held in it all her outrage and fury. “Aghhh! Let me go!”

“I advise you to keep your voice down. Warrick may be a bit hard of hearing, but travelers passing on the road will spread the story even faster than he will.”

“Travelers? Ouch! Ow! Ow!” She beat on the seat with her free hand, but tried to moderate the volume of her protest. Someone might hear her? Someone might know what was happening to her? To be forced to admit that this man could impose his will on her in such a complete and physical way was intolerable to her, but to have the fact known by anyone else was simply not to be considered. In her mind’s eye, she could see what a ridiculous and helpless picture she must present. Her face flamed as hot as her bottom and the tears of anger and frustration started to pour down her cheeks.