The Duke’s School for Young Ladies by Emily Tilton 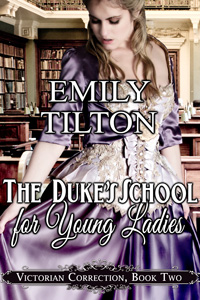 When her governess catches eighteen-year-old Anne Solmes in the act of pleasuring herself, Mr. and Mrs. Solmes conclude that drastic action is required. Anne soon finds herself on her way to Miss Halton’s Preparatory Academy for Girls, a school founded by the famously strict Duke of Panton for the correction of young women of marriageable age. The girls of Miss Halton’s have disgraced themselves, but their future prospects may still be salvaged by means of proper discipline and training. Anne quickly discovers that her new schoolmistress will not tolerate disobedience, and that punishments for misbehavior are both harsh and humiliating.

Though he samples the pleasures his position offers, the duke does not keep the girls of the academy for himself. It is not long before one of the duke’s associates, a handsome, dominant gentleman in his own right, seems ready to ask for Anne’s hand. But is Anne prepared to spend a lifetime with a man who expects her obedience to his every demand and who will not hesitate to punish and pleasure her as he sees fit, no matter how deeply she might blush at his mastery of her body?

“B-but, your grace,” she stammered, as if returning her mind to an unwelcome thought that she had tried to thrust away, but that now returned with redoubled force. “That is not my—I mean…” She bit her lip and whispered. “Was she… jesting… I mean, about my… bottom?” She compressed her lips tightly together, as if she wanted to prevent further words from escaping them—words of protest and words of alarm.

The duke heaved a sigh. He could not deny that Mrs. Fayerweather’s vicious humiliation of Clarissa’s girls aroused him, despite himself. He could not deny that the thought of making Anne get the bolster and lay it upon the bed herself, and then lay herself over it so that the duke could win from her backside her final maidenhead, fired his blood. But the apprehension in Anne’s face brought out his tenderness as well.

Anne nodded, trying, the duke could see, to look brave. “I understand, now,” she said. “When she… flogged me, and Sarah Crawley…” Her eyes widened then, suddenly, and she whispered, “Three times?”

The duke felt his own brow crease. “Three times, my dear?”

“She—Sarah—said… I mean, Mrs. Fayerweather asked how many… and Sarah said…” The girl’s face had turned crimson.

The duke remembered his visit with Sarah, and smiled. “Yes, well,” he said, “when a girl has a bottom as nice as Sarah’s—and as yours, for yours is just as fine—I will sometimes wake her in the night to have her there again.” The fear in Anne’s eyes made the duke’s cock leap. “And then Sarah had a spanking in the morning, because of things in her past…”

“She observed her sister fucking and told a tale of it, which was very naughty. I spanked her for that, over my lap like a little girl who has told a naughty tale, and then her bottom looked so very rosy that I found I must fuck it.”

“Will you spank me?” Anne said, as if to divert her attention from the prospect of bottom-fucking.

“I may,” the duke admitted. “I like to spank girls over my knee. Would you like to be spanked over my knee, sweet Anne?”

Anne looked thoughtful. It had certainly never occurred to her that a person could wish to be spanked. “If I must be spanked,” she finally said. “I would like it to be over your knee, your grace. Would you… would you do the other thing… too?”

“Fuck your little bottom-hole, you mean?” the duke asked, chuckling a bit.

“I am going to put my cock there, spanking or no spanking,” he said, “in a little while.”