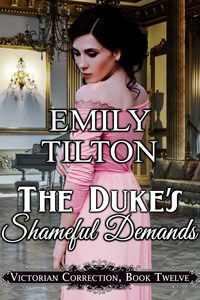 When she is chosen by the Duke of Norley to provide entertainment at an upcoming festival, eighteen-year-old Clara Mansfield is unsure what to expect. Upon being ordered to strip herself bare at the outset of her training, however, the innocent young lady quickly realizes that this will be no ordinary ball and she will soon be putting on the most shameful performance imaginable.

Clara will not merely sing and dance naked for the duke and his many esteemed guests, she will also surrender her beautiful virgin body for the use and enjoyment of the host and anyone with whom he decides to share her. But will one of those gentlemen turn out to be her future husband?

Clara opened her mouth, then, with a gasp, and put out her tongue, and James saw to his delight how she wished to please him in return for the pleasure his knowing fingers bestowed between her slender thighs. Gently he placed his hard penis between her lips, and gently he began to fuck her there, grunting at the velvety enjoyment to be had in that shameful act of submission by a girl he had brought there for her first fucking.

He realized, then, that the duke’s consort must have left their stand to take a place much closer to the bowers and perhaps even within the wood itself. Their music began again, softly but very close, and sweet beyond measure—not a dance now, but a sylvan air such as a fairy servant might sing as King Oberon fucked Queen Titania for the first time.

“Remarkable,” said the duke. “Not exact, but truly remarkable.”

James did not understand his grace’s words until, still moving in Clara’s sweet mouth, he turned his head to the right to see that John Eliot did the very same thing to Laura, now, that James did to Clara: the valet’s enormous prick moved resolutely—perhaps a bit more roughly than James’ in his maiden’s mouth—between the town girl’s lips, demanding the delight to be found there before enjoying cunt and bottom, just as the clergyman did of his village girl. John’s left hand, like James’ strayed between his maiden’s thighs, as well, to reward the girl for her compliance with his prick’s urgent thrusts over her tongue. The valet’s right hand was twined in Laura’s hair, to enforce the service of her mouth, while James’ own right hand merely held Clara’s chin gently—that must, James thought, account for his grace’s saying not exact.

Looking down at Clara’s sweet face, with the prick moving in and out as James pressed his hips forward and withdrew them, the need came upon him to have her entirely. He considered for a split second how he would deflower the wet cunny he fondled now. He dwelt for a moment upon the idea of turning her over the edge of the bower bed and thrusting into her from behind to instruct her from the start in a masterful man’s pleasures. There would be time enough for that sort of dominant enjoyment, though: James knew what nature told him most urgently to do.

Paying no attention to the couple on the bed next to them, and still less to the observers behind him, James took his prick from Clara’s mouth, and saw a look of bereavement upon her face, her mouth still open as if to tell him that he might fuck her between her lips any time he wished,

“It is time, Clara,” he said softly, and he moved to the end of the bed. Quickly he took hold of her waist, and drew her all the way down to him, changing his grip to her knees and raising them high, pressing them back so that her cunt and her cringing anus lay open to his view. He stripped off his shirt over his head and dropped it to the leafy ground, so that he stood naked before his darling girl, whose mouth still hung a little open as her eyes, fixed upon James’ erect penis, went wide.

He put his right hand upon her warm, wet cunt, and he parted the petals that hid her young vagina—the sheath made for his sword, when he should thrust it into her and bring her maiden blood, proof of her virginal submission.

2019-04-05
Chris
Previous: Property: A Dark Billionaire Romance by Loki Renard
Next: Shared by the Vikings: A Reverse Harem Romance by Lily Harlem