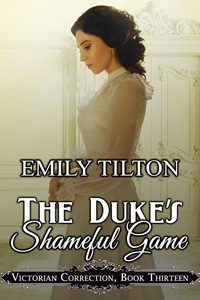 When her guardian learns of her scandalous behavior in London, eighteen-year-old Dora Harper is brought to his country estate for a painful chastisement and a humiliating lesson in obedience.

But the stern, old-fashioned gentleman does not intend merely to reform his wayward ward. He plans to claim her, first as his bride and then as his playing piece in a game far more shameful than anything she could have ever imagined. Bare and blushing with her helpless arousal on display, the headstrong young lady will be taught her place in the most humbling way possible.

Dora gave a cry to match Miss Norton’s, though she hung her brown-haired head and arched her back, as if she could not bear to look upon the guardian who meant to have her maidenhead and yet must nevertheless press back to invite her full defloration. Sir George moved his prick softly in and out, now, thrilling to the sight of his possession of his young ward’s sweet cunny, within the tied-open muslin of her special new drawers and below the merited welts he had given her with the cane in his study. Dora whimpered softly, pushing her backside out a little further, even, offering herself as much as she could while bound by the stout belt that secured her to the punishment horse.

The belt, the squire reflected, would keep her perfectly in place for her guardian’s prick when, so soon now, he began to fuck. More, when the time came to have her bottom, as he fully intended to do, he would only have to spread her chastised buttocks a little to disclose the tiny flower of her virgin anus, and then he might enter there just as he liked. He would spend in the girl’s bottom, he decided, just as he knew Doctor Brown recommended when training a young woman to the penis.

“None but yourself, Mr. Eliot, shall have Miss Norton’s virginity,” said the duke, chuckling. “I have seen your way with Clarissa here and I did not wish to lose the opportunity to watch you possess an untried cunt and break it in properly—indeed if our game proves a successful exercise, it is my idea that the pupils of my school shall have their maidenheads taken just this way.”

Dora, though, responded best of all, to the squire’s mind. “Please, Sir George,” she begged softly, just casting a needy glance back at him.

His natural instinct took hold of him, and he put his hands firmly upon her hips. He held her tightly there, and he drove his prick in very hard, overcoming the resistance of her maidenhead with the strength of his thrust. Dora screamed, and her body writhed over the block, but Sir George held himself in at full length, training her to obey, teaching her that she would have his hardness inside her when he pleased. Her bottom squirmed delightfully against his lap as he began to ride her with small motions of his rigid shaft, withdrawing only an inch or so and then taking full possession of her cunt again.

“Is she tight, Sir George?” inquired the duke.

“Oh, yes, your grace,” the squire replied, his voice sounding thick with pleasure even in his own ears. “Very tight indeed.”

Dora moaned as she had her first fucking, the punishment horse beginning to creak with her guardian’s rhythm. “Oh, sir…” she whispered. “I…”

Sir George stroked her back gently, not ceasing his movements in her velvet cunny. “Does that feel better, now, my love?” he asked, bending over to speak softly into her ear.

He caught sight of the deep crease in her forehead as she nodded her head. “I need it,” she murmured. “Oh, I need it.”

“You shall have it, Dora,” the squire said. “Both now and in the future. In your mouth and in your cunt and in your bottom.”

At the last phrase, Dora shook her head, but she said, in the same tone, as if hypnotized into a true self she had pressed down deep inside herself, “I need it.”

“You do, my love,” her guardian said, riding harder now. The pleasure of the girl’s virgin tightness grew so great that he knew he must complete his possession of her that instant.

“Your grace?” he asked the duke. “May I trouble you for a little of that oil? I wish to climax in Miss Harper’s anus.”

Dora turned her head again for a moment, as if a modest part of her wished to object, but at the same time the duke poured a few drops of the oil into Sir George’s palm Mr. Eliot had begun to move around the side of Miss Norton. Dora’s head swiveled, her cheeks seeming to turn an even darker red as the doctor-in-training began to unbutton his flies. Even with her guardian’s penis in her cunt, Dora seemed unable to turn away from the sight of another massive prick, held now in Mr. Eliot’s right hand, while with his left he reached over Miss Norton’s body to work her between her legs—a sight the squire would have found very diverting if he had not had Dora’s bottom open upon his fingers, anointing her rosy little anus with the preparation that would let him enter there.

2019-10-26
Chris
Previous: Fear: A Dark Mafia Billionaire Romance by Sara Fields
Next: Kept by the Mountain Beast by Celeste Jones