The Education of Eliza Smith by Jane Fairweather 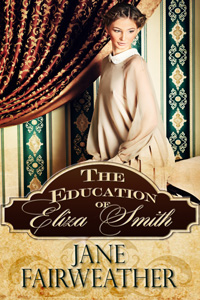 After her father’s untimely passing, the decidedly spoilt eighteen year old Eliza Smith learns that he was deeply in debt and the family farm in Pennsylvania must be sold. Eliza finds herself without an income or the skills to earn one—though she is a truly gifted pianist—and she is forced to find work as a hotel maid in Philadelphia.

Not long after arriving at the hotel, Eliza meets a man calling himself Lord William Gibbon of Norton Fitzwarren, who assures her he is an English gentleman. Inexperience and a certain lack of common sense cost Eliza her job at the hotel and she accepts William’s kind but ambiguous offer to return with him to England. Once she has crossed the Atlantic, however, William’s claims to nobility prove to be greatly exaggerated, and then he is reclaimed by an old lover. Eliza finds herself alone in England with employment prospects even worse than they were in Philadelphia, and this unfortunate state of affairs eventually results in her scrubbing floors at a London hospital with a sore bottom.

But then she meets William’s brother Henry, the headmaster of a prestigious school. Romance ensues, and almost before she knows it Eliza and Henry are wed, but soon enough the couple must confront the dire truth that much of the time they struggle to stand one another. The music that matters so much to Eliza seems dark and gothic to Henry, and Eliza is rather less than entirely at home in an English boarding school. It seems, in fact, that there is only one thing they truly share: a fascination with corporal punishment. And that does not seem entirely proper for a headmaster in Victorian England… Will Henry take his young bride over his knee for a bare bottom spanking, and if he does, will it rekindle their passion or will it all end in disgrace and scandal?

“You’ve no right to spank me!” protested Miranda, though her voice was muffled by the combination of cushion and hair.

“You asked for it, my dear, and you are going to get it,” retorted William, bringing his hand down even harder on her left buttock.

He spanked very hard, alternating cheeks. He left just large enough gaps between spanks for her to dread the next one. He enjoyed the slowly growing warmth of his beloved’s behind as it felt the full weight of a very well deserved retribution. She took it at first in silence, thinking she was not going to give him the satisfaction of crying out, but after a while she pleaded desperately, then burst into tears. He let it go on for perhaps twenty spanks after that. Then feeling enough was enough, he ordered her to stand up and face the wall with her hands on her head. Miranda, feeling more submissive than she had ever done in her life, for once did as she was told. She felt very conscious of her intense moistness and arousal, but also of her oddly pleasurable humiliation.

But then she heard William swishing the cane and realized she was in for a double punishment. She felt genuine fear and interest. What if it stung as much as Henry said it did?

“You’re not really going to cane me?” she asked, hoping he would just go through the motions or let her off altogether. Why had she bought the darned thing? It was a ridiculous thing to have done.

“Move away from the wall, pull your drawers up, and fasten the buttons. Now bend over and put your hands on your knees. I am going to give you six of the very best.”

She obeyed in silence, dreading what was coming, for Henry had described the grades of English punishment. An ordinary six with the cane was not too bad. The first five were flicks that stung but did not mark you, but the sixth was put across the rest and left a vicious welt. But according to Henry, six of the best meant every stroke marked you. She found herself trembling a little and hoping that William did not really mean it. If he did, she probably would not be able to sit down for a while. And yet despite all this, she found herself in an odd state of anticipation. At least she was keeping her drawers on. She found herself being swivelled round as William realized he would need more room to swing the cane.