The Firefighter’s Girl by Natasha Knight 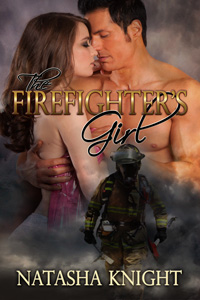 When twenty-eight-year-old Rebecca Banks learns that her next physical therapy patient is none other than Sawyer Hayes, she stays professional, but deep down she can’t help but panic. She hasn’t seen Sawyer for ten years, and their last meeting ended with him giving her a spanking she would never forget. Now Sawyer is the fire chief in the small town that has become her home, and it is an injury sustained in the line of duty which has brought him back into her life.

Even as he works hard on his recovery, Sawyer’s mind is on something else—repairing Rebecca’s trust in him. When her deadbeat boyfriend and his family implicate her in a serious crime and she’s sent to the local jailhouse to await trial, Sawyer pays her bail and brings her home with him under the condition that she obeys him… and that disobedience will have consequences.

Rebecca agrees, but when she defies her self-appointed guardian she soon finds that a hard, bare-bottom spanking is far from the most embarrassing punishment Sawyer is prepared to employ. Though Sawyer’s punishments leave her with cheeks blushing as red as her well-spanked bottom, they also ignite feelings and desires she never knew she had, and soon his fierce need to dominate and lead her is matched by her growing need to obey him.

Rebecca and Sawyer’s newfound romance grows quickly, but the stress of preparing for her upcoming trial continues to build and she fears the verdict will send her to prison. Can her firm-handed firefighter protect her, or will she be torn from his loving arms?

“I’m thinking I’m not making enough of an impression,” he said, tucking the hem of her skirt into the waistband. “I’m thinking a bare bottom spanking will make my point more effectively.”

She sucked in a breath when she felt his hand come to rest against her bottom, remembering the over-the-knee socks she had put on under her boots earlier that day, imagining the sight she made for him.

“Already better,” he said. “Am I getting your attention now?”

“I think we’ve established that I can,” he said, his fingertips just touching the waistband of her lacy pink panties. “If you remember, bare is best.”

“Sawyer,” she just managed, her entire body frozen while he slowly pulled her panties down her thighs to bare her bottom.

After a moment in which she stared wide-eyed at the carpet and he most likely stared wide-eyed at what he had just exposed, he resumed her spanking, this time without the lecture. He smacked hard and fast, alternating cheeks, the pain quickly becoming an all-consuming fire on her backside and upper thighs. She called out and grunted, struggling all along while his big hand rained down her punishment, each stinging blow calling tears from her eyes. Her focus at first was the pain, the sheer pain of a hard bare bottom spanking. Each smack stung more than she could remember a hand spanking could sting, and as he continued, not giving her a moment to recover between smacks, that sting developed into a hot, throbbing pain. The sound of flesh striking flesh filled the room and around that sound was her own sniffling, her crying, her groans and eventually, her begging for him to stop, that she’d had enough.

After some time, he paused, resting his heavy hand on her hot bottom. She had stopped struggling just moments before and now forced her attention to her breathing, trying to calm herself, hoping it was over. “I don’t want to punish you, but I care enough about you to do this, Rebecca,” he said. “You need to leave him. You need to just get out of there before it’s too late.”

The only person who had ever cared enough about her to give her the time of day had been Amelia. Jeff was using her, she knew it, and Sawyer saying it made it impossible to deny. Friends? She had none to speak of, not real friends. Every now and then, she would have a drink with a colleague but that was all that was, that was all they were: colleagues. Some were more sympathetic than others, but they weren’t really friends. She had always kept her true thoughts and feelings to herself. She had learned to do it so well, she even could keep the truth from herself.

Sawyer had, over the course of his therapy, managed to get her to trust him again. She realized part of that was because of their brief relationship all those years ago, but when she had left then, she had thought she hated him, hated him for humiliating her like he had that last night. But truly, wasn’t he just doing then what he was doing now? Taking care of her in his own way? All she knew now was that even lying over his lap with her bottom exposed and on fire, she felt safer than she had ever felt in all the years without him.

No, surely there was something wrong with her. The man had just upended her over his lap, stripped off her panties to bare her bottom and thoroughly spanked her, and she trusted him?

2014-05-21
+admin
Previous: Her Dominant Doctor by Bella Jackson
Next: The Art of Discipline: Running Toward Trouble, Book Two of the Mockingbird Chronicles by Stardawn Cabot and Alexandra James