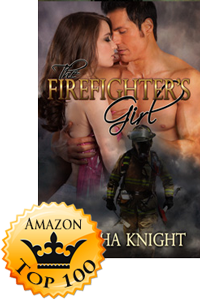 See what readers are already saying about this book!

This is a fantastic book from the first page until the last, I literally started reading and did not stop until I finished. This book has everything I love, and then some, and is extremely well written with a wonderful, suspenseful, detailed plot and characters that are so believable you just can’t help becoming emotionally invested. Rebecca makes some poor decisions particularly with men, she gave up the best one and got stuck with a terrible one, but eventually she sees the light and Sawyer is right there to make sure she makes the right decision this time. Their romance is not a smooth road but oh, I so enjoyed experiencing the twists and turns along the way. If you are looking for a great read, and I mean great, then look no further. Let me just say if you have not read Ms. Knight’s books before you just don’t know what you are missing, seriously. Quit reading here and click the button to buy, you will be so happy you did!

Everyone knows a Rebecca Banks in real life. She’s the kind-hearted, people-pleaser who wants to see the best in everybody, but who allows herself to be taken advantage of by a series of loser men. You can only feel sorry for her for so long, then after a point you want to slap her, and shout, “wake up.”That’s pretty much what happens in this book—only physical therapist Rebecca Banks gets spanked. She is taken in hand by a man from her past (a firefighter) when she is unable to do what she should do and break free of her verbally abusive, drug-using deadbeat boyfriend. Unfortunately, this does not happen soon enough and Rebecca is embroiled in legal troubles when her ex-boyfriend and his pals implicate her in a serious crime.I liked this book a lot. It is a well-written, slightly edgy novella that skates the line between spanking romance (domestic discipline) and BDSM. As the reader, I cheered when Sawyer, the man from her past, took her in hand in an effort to get her to do the right thing for herself. Rebecca is exactly the sort of woman who needs a keeper.I could see author Natasha Knight writing a sequel to this novel involving Rebecca and Sawyer (hint, hint) because I can see them further exploring the BDSM side of their relationship. I also liked the peek at Rebecca’s attorney’s relationship with his wife, and think they deserve their own book too.Nicely done!

One of the things many things I love about Natasha Knights books is that the characters are so real. They jump into things in the same way I might, not always thinking ahead to the potential outcome. Rebecca was very easy to identify with. Her life had drifted out of her control, not through being bad or lazy, but because she hadn’t the confidence to fix it. After a really bad start in life, Rebecca had managed to get her act together, put herself through school and generally get her life in order. She also had a no good boyfriend who was too happy to sit up on her, and drag her down with him. Enter Sawyer, a blast from the past, Sawyer had carried a flame for Rebecca, and as her life began to implode, Sawyer was there to pick up the pieces,and guide his girl with a firm hand and a full heart. As always, steamy spankings and hot erotic scenes are there to delight.

I need a lot of letters. I won’t complain at a 500 page book. Hell, I won’t complain if each book of a trilogy is 500 pages. I’m slow. I like slow. I like things explained to me. I like if things fluently move towards the inevitable disaster and just on time will be fixed. And so the first thing that was disappointing about Natasha Knight’s “The Firefighters Girl” was it was only 130 pages. Maybe you think this is enough. I don’t. The second thing that was disappointing about the Firefighters Girl was… nothing. No really, it is such a endearing story with a very strong and stern firefighter chief Sawyer. A man that fights not only fires, but also this wonderful girl Rebecca, stubborn like all the ladies in Ms. Knight’s books. And so naive. So delicious naive. And I have been where she was, blind in matters of love. I believed her right from page one.I loved the intense play between Sawyer and Rebecca. Ahum. Intense. The burning kind. Maybe I wouldn’t have Sawyers’ pace in the relationship. I’m slow. I like slow. But on the other hand, he waited for a very long time for this chance and now he is man enough to have a go at it. And he is just what her lawyer ordered: a man to hold on to.I gave this book the full five star rating, and I wouldn’t take one star back, even if you asked it nicely.

Great shorter novel from the mega talented Natasha Knight. Sawyer is an injured firefighter. Rebecca is the physical therapist who he fell in love with and spanked 10 years ago. Brought together by fate when Becca is wrongly accused of running a meth lab. In typical Natasha fashion the spankings are hot and the Sex even hotter. Loved it start to finish. Great as a week end read.

I started reading this book last night at 11:PM and could not go to sleep until I finished the book. The characters were so real, that I found myself drawn in and at one point had to put the book down because I was angry at Rebecca for leaving Sawyers house to go meet Jeff. She once again didn’t think about how bad an idea it was. Of course I’ve knew there would be a HEA and that all the pieces would fit together. I didn’t get to sleep until 4:AM but it was well worth it. Bravo Natasha.

2014-05-27
+admin
Previous: Becoming Little Lexie by Sue Lyndon
Next: The Art of Discipline: Running Toward Trouble, Book Two of the Mockingbird Chronicles by Stardawn Cabot and Alexandra James