The Firefighter’s Woman by Loki Renard 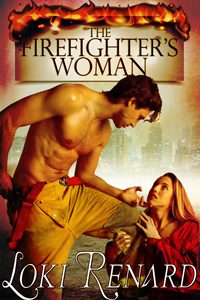 After a tornado tears through her neighborhood in the middle of the night, twenty-one-year-old Sarah Simmons is determined to gather up her most precious belongings before leaving her badly damaged home. But the huge, handsome firefighter who arrives to rescue her makes it clear that the house could collapse at any moment, and when Sarah refuses to do as she is told he merely tosses her over his shoulder and carries her to a waiting ambulance himself.

Though Sarah is perhaps the most stubborn woman he has ever met—let alone pulled from the ruins of a building—John Ford knows right away that there is something special about her. He checks on her at the local hospital later that night, and after seeing the miserable, lonely look on her face, he does his best to comfort her. When she insists on trying to leave without the doctor’s permission, however, he decides that enough is enough and spanks her bare bottom thoroughly.

Upon discovering that Sarah is an orphan with nowhere to go after the destruction of her home, John takes matters into his own hands and offers to share his house with her. But while she lives under his roof she will be expected to behave herself, and failure to do so will have consequences for her cute little bottom.

To Sarah’s surprise, John’s old-fashioned approach to keeping a woman in line excites her deeply. She can’t help longing for him to claim her properly, and when he takes her in his arms the pleasure of his skilled, dominant lovemaking is more intense than she would have thought possible. But even as her passion for him grows, Sarah’s painful past leaves her hesitant to let herself fall in love. Can John find a way to heal her wounded heart before he loses her forever?

Publisher’s Note: The Firefighter’s Woman includes spankings and sexual scenes. If such material offends you, please don’t buy this book.

“I bet you planned this all along,” she said suspiciously. “You set me up! You knew I’d try to go back to the house, so you sneaked along behind me and then you caught me all because you want to punish me. Well, you can’t punish me, because I’m a grown woman! And you’re… well… you can’t, alright? John? Can you hear me? John!”

By that time he’d pulled into his driveway and turned the car off. Sarah sat in the passenger seat, watching him with wide eyes as he walked around the car, then opened her door and took hold of her by the hand once more.

“John!” She said his name as if saying it would somehow get her out of trouble.

He marched her into the house without speaking, where he wasted no time whatsoever in sitting down and taking her over his knee. Sarah tumbled over his lap with a wail of complaint, limbs flailing, but it didn’t do her any good. She was still wearing the sweatpants he’d gotten for her, which made it easy to bare her bottom and start spanking her deserving cheeks with hard slaps that left bright pink palm prints across her pale skin.

Sarah put up quite a fight, squirming and cursing and kicking out until he had to put one of his legs over hers and clamp her thighs between his. That left her in a much more precarious position, her butt raised higher than before, her hands supporting her on the carpet, her hair falling into her face as John set about really tanning her hide, his palm finding her bare bottom over and over again with unerring accuracy, which made her voice rise in feminine protest.

“No,” he said firmly as his hand slapped one cheek then the other in a quick peppering motion. “You put yourself in danger. You deserve this and a whole lot more. Consider yourself lucky my belt is still on my pants, young lady.”

2016-09-04
+admin
Previous: Her Alien Commander by Ashe Barker
Next: The Terranovum Brides Trilogy by Sara Fields