The Firm Hand of the Law by Loki Renard 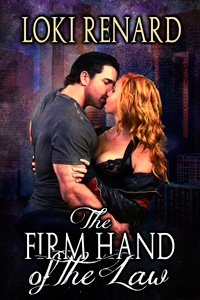 Lily Brannigan is fed up with running a seedy bar just to make ends meet while trying to ignore the smuggling ring her criminal family runs out of her place of business, but she’s no snitch, and when detective Gareth Knight shows up and starts asking questions, he gets no answers. Cop or not, though, Gareth is strong, handsome, and bossy in a way that makes her melt, and it isn’t long before Lily gives in to her body’s demands.

Gareth is not a man to be trifled with, and he informs Lily in no uncertain terms that he intends to be around until this case is over. He’ll be making sure she takes care of herself—something Lily hasn’t been doing for years—and when her behavior puts her safety at risk, he has no qualms about taking her over his knee, baring her bottom, and spanking her long and hard.

The walls around Lily’s heart begin to crack as Gareth’s attention and care make her feel loved for the first time in ages. His skilled, dominant love-making leaves her begging for more, but if her bosses realizes she’s bedding a cop her life will be in grave danger. Can she trust Gareth to keep her safe, or is she just a means to an end for him?

“Off to the cells with you, my girl,” he said, giving her a little nudge forward.

“Good,” she replied. “I needed a break from this place anyway.”

“Oh really?” His reply was as calm and falsely cheerful as her statement. “Well, we have a range of fine penal institutions spread across the country. I can arrange a stay for you in any one of them.”

“Penal institutions are probably the closest you get to anything penile,” Lily muttered under her breath.

“I heard that,” he said, sounding almost amused. “That sort of talk will get your butt tanned before we get to the station.”

“Because putting innocent people in cuffs isn’t enough humiliation for you,” she argued over her shoulder.

“You’re not innocent,” he reminded her, giving her a swat. “Get moving.”

The sting in her butt sparked her temper and made her do the worst thing anyone in handcuffs can ever do—she kicked the officer holding her. Immediately braced for retaliation, Lily waited for the beating to start. It didn’t. Instead she was swept off her feet entirely and only came down once the cop sat down on her sofa and put her over his thigh. Without any further discussion, he started spanking her bottom hard and fast. It sounded like a thunderstorm in her apartment, slaps falling like torrential rain. The cuffs kept her from protecting her bottom, so she was completely helpless as his palm punished her.

“You’ve been getting away with being on the wrong side of the law for a long time, but that run is over, young lady,” he lectured. “I’m taking you in, and no tantrum is going to stop me.”

Lily’s reply was caustic and filled with curse words which didn’t rise to the level of sense. She was outraged in the extreme. How dare he! “You’re not allowed to hit people!” She screeched the objection at the top of her lungs. “You’re breaking the law too!”

“There’s no law against giving a girl a spanking when she needs one.”

“Yes, there fucking is!”

“Not in my book,” he replied, whacking her bottom with resounding slaps. “And that’s the only one that matters right now, wouldn’t you say?”

He was right. There wasn’t anything she could do in her position, cuffed and caught over hard thighs. The sting had turned to a flame searing her cheeks, each new swat stoking the fire. She was left to kick her legs and squeal like a piglet, or so it sounded to her ears. Her face flushed with the shame of it all, hating how vulnerable she was. Being arrested was one thing. There was due process in an arrest. You got your stuff taken, you got your fingerprints recorded, and you got your picture taken, but you didn’t get your ass spanked.

“You ready to go to jail now?”

“Now that’s what I like to hear,” he said, resting his hand on her bottom and moving it back and forward slightly. Was that a rub? Was he rubbing her ass? She couldn’t believe it, but she wasn’t going to complain either. The small movement relieved some of the discomfort which had consumed her hide. “Unless, of course, you’re ready to talk sense with me.”

His hand squeezed her bottom and the tips of his fingers grazed between her cheeks. They slid lower until he was touching her pussy through her leggings. Her gasp was not of complaint. He had thick, long fingers and the lower they strayed, the more of their length was pressed against her slit. She was not wearing panties under the leggings in an effort to avoid visible panty line, so there was very little protecting her from his touch.

It was madness, but she spread her thighs just a little and was rewarded when the pad of his index finger settled over her clit and started circling. Her sigh was soft as she clenched her stomach, bearing down against his hand. The pressure grew a little as he went once, twice, thrice around her clit, then rubbed his fingers along her slit all the way up to the moistening aperture.

Lily lifted her hips. His fingers pressed down, her leggings delving between her lips as he massaged gently. Part of her mind was screaming to stop, but that part grew smaller and smaller with every movement of his fingers.

It had been a long time since anyone had touched her like that, with a masterful desire that gave as much pleasure as it took. The leggings were a frustrating barrier, but one that was quickly becoming soaked with her juices. The tingling in her bottom, first whipped by his palm, now artfully stroked by his dominating digits, had spread deep into her pussy.