The Gunslinger’s Woman by Kelly Dawson 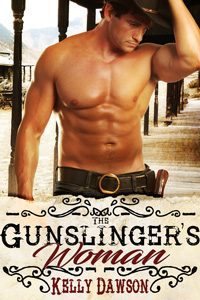 The last thing nineteen-year-old Jeannie Cooper wants is to be a prim and proper lady, so when her older brothers try to send her off to finishing school she runs away from the family ranch to keep them from putting her on the train to Boston. She plans to hide out on the prairie and return in a few days, but things go horribly wrong when she stumbles upon the infamous Mullins gang.

Danny Coulter is a hardened gunslinger with more than enough enemies already, but when he sees a beautiful young woman held captive by outlaws his conscience forces him into action. Rescuing Jeannie turns out to be only the beginning of his troubles, however. Her sass and defiance quickly test the limits of his patience as he endeavors to get her home safely, and before long he is left with little choice but to take her over his knee for a sound spanking.

Though Danny’s firm-handed discipline leaves her bottom sore and her cheeks blushing, Jeannie is nonetheless excited when her brothers offer him a job at the ranch. Soon he is courting her in earnest, and after a local busybody witnesses him giving Jeannie the first bare-bottom spanking of her life, Danny proposes marriage to avoid a scandal. But with the Mullins gang out for revenge, will his quick draw be enough to protect his woman?

Publisher’s Note: The Gunslinger’s Woman includes sexual scenes and spankings. If such material offends you, please don’t buy this book.

“You’ve got a reckoning coming, little girl,” he scolded.

“Yes.” He sat on the rock and pulled her down across his thighs and although she fought, she was no match for his strength, and Danny effortlessly held her pinned securely against the muscular hardness of his body.

“Let me up, you brute!” she yelled, squirming and twisting, but finding herself held fast by Danny’s strong arm across her back.

Danny didn’t let her up. Instead, he smacked her upturned backside several times, hard and fast. “You deliberately disobeyed me.”

She gasped at another hard swat that showed her just how displeased Danny was at being disobeyed.

“I told you to get down out of the tree and you refused.” Another hard smack punctuated his words. She grimaced. Danny spanked as hard as Tommy did!

“When you’re traveling with me, you have to mind me. It’s best you learn that now.” Two more hard smacks made her yelp and squirm some more.

“Why do I have to mind you? You’re not the boss of me!” Jeannie wailed, outrage mixing with the fire Danny had ignited in her bottom and making her voice shrill.

It was obviously the wrong thing to say—at her words, Danny rained down a rapid-fire series of hard spanks that stung and burned and no matter which way she squirmed, she couldn’t avoid his punishing hand.

Danny’s hard hand landed again, but despite the fierce pain it inflicted, Danny’s words warmed her heart. Did he really think her beautiful? She bit back her cry, but she could do nothing about the tears that were pooling on the ground beneath her.

“How can I keep you safe if you won’t listen?” Danny growled.

“I did listen!” Jeannie protested.

Danny’s hand stilled then, his fingers caressing her stinging bottom gently. “Yes, I suppose you did,” he conceded, and a victory smile spread across her face. Then she gulped as she felt him raise his palm again. “But you didn’t obey, and it’s very important that you be obedient out here.” More spanks fell then, so hard and fast that she couldn’t distinguish one from the next, as her bottom grew hotter and hotter.