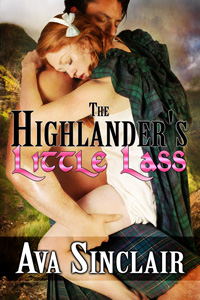 As the daughter of a powerful highland laird, Glynis McLeod should have made a fine wife for any Scotsman. Having been deprived of discipline by her mother’s untimely passing, however, Glynis grew up wild and unchecked. As a lass of twenty, she has precious little respect for any man, let alone a husband her father might choose for her.

But even a doting father must obey his king, and when the king demands a marriage to ensure lasting peace between rival clans, Glynis finds herself the very reluctant bride of Bran McKinnon. Known as Bran the Bull—both for his size and his fearsome sexual appetites—he is a man accustomed to being obeyed, a fact which is quickly impressed upon Glynis when her lack of decorum earns her a bare-bottom spanking from her future husband in the great hall of her father’s castle.

As soon as Bran lays eyes on Glynis, he knows the fiery redhead is exactly what he’s been seeking: a woman who needs both the firm hand of a father figure and the dominant lovemaking of a husband. With the help of her childhood nanny, Bran sets about training his feisty highland lass to be the obedient wife he expects. Blushing cheeks and a sore bottom quickly help Glynis become the good little girl her husband desires, but when danger threatens the king’s peace, will Bran recognize in time that there’s more to his young bride than meets the eye?

“You’ll make an apology to your father and all assembled, or you’ll be sorry,” Bran warned, ignoring her barbs.

“I’ll nae apologize to my betraying bastard of a father or you and your worthless kin! You can all go to Old Nick, if he’ll have the sorry lot of ye!”

“Very well, then,” Bran said, walking over to the raised platform and brazenly taking his place in the chair the other laird had vacated. “Since we’re to be married, it’s best that ye learn from the jump what happens when ye disobey!”

Glynis was pulled so abruptly across Bran’s broad lap that the breath was momentarily knocked out of her. When she next exhaled, it was in a cry of outrage at the feeling of cool air hitting her bottom. The beast had bared her! He’d bared her in front of everyone! She tried desperately to pull herself off his lap, and when she couldn’t, she looked up to fix her shocked and panicked eyes on the first person she saw.

Her nanny stared back with a cool look of satisfaction that chilled her, and Glynis knew the woman was taking enormous gratification from what was shaping up to be her charge’s first and well-deserved public humiliation.

The next sound Glynis heard was a smack! that echoed off the stone walls of the room. The sound was punctuated by a scream—her own scream. How long had it been since she’d been spanked? She’d not exaggerated on the stairs when she’d reminded Ina that her last correction had occurred when she was still in nappies.

The blows seemed to be falling everywhere. She tried to look back, but the cloud of hair obscured her view and all she could feel was that huge hand falling and falling, the expanse of it nearly covering the whole of a bottom that was getting hotter and more tender with each passing blow.

“Stop! Stop! Stop!” Glynis wailed, abandoning the stream of curses she’d planned to employ. Her bottom felt like it was on fire—as if it were swelling into a hot, painful blister. And—oh, god!—if she was facing Ina, then it meant her bottom was facing…

Her head was hanging down and she looked past Bran’s bare, broad leg for an upside-down view of a group of smiling McKinnons. She hated them—hated each and every one—but could not tell them; all she could do was cry.

And then suddenly, it was over. The blows had stopped, even though the steady agonizing throb continued. Glynis swayed as Bran righted her to her feet. The big hand that had just spanked her now pushed aside tendrils of hair that tears had plastered to her face. The touch was surprisingly gentle.

2015-05-23
+admin
Previous: His to Command by Kallista Dane
Next: Striker by Patricia Green