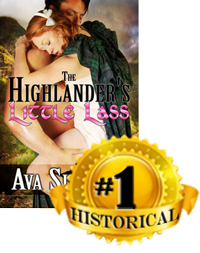 ★★★★★  Nicole Vela @ Amazon.com “Be still my beating heart!” on May 27, 2015
Glynis McLeod, sexy,rambunctious and a true wildcat! Having dismissed her last suitor it’s up to a bull to control the vixen. She is everything you could want..status..beautiful but she is lacking in discipline and her new husband won’t have none of the childish behavior… act as one, you will be treated as such. Bran McKinnon, better known as Bran the bull…has all the attributes any woman would want, especially when said man is well endowed and as a lover of women that is until he catches a glimpse of his new bride. She is now his baby..his to love… to cherish..his to discipline! But when she stumbles upon a secret, her husband dismisses her and with her life in peril it’s up to the man to seek out his redhead goddess before it’s to late. This book has so much going for it, this has to be one of the best books I have read in the area of age play, domestic discipline and is the perfect addition to your d/s library. Gave the book 5 stars, the characters are well developed, and the storyline was intense and exhilarating. The book had me craving more..much more. The book deserves more then 5 Stars, it is definitely a new favorite. If you are looking for delicious historical Scottish erotica this book is for you.Having never heard of Ava Sinclair she has a sexy well written book, I hope she makes this into a series. The potential for a series is phenomenal. It’s a literary delight, it’s just a readers dream..stellar writing!..More pleaseee

★★★★★  Euphoria @ Amazon.com “This was a fun and fantastic read” on May 23, 2015
This was a fun and fantastic read! I was whisked away to another place and time as soon as I read the first page. This book starts off hot and heavy, throwing us into a full blast sexy treat and into the first character right away, after which I could not put this book down. I am a demanding reader when when it comes to character depth and dialogue and Ms. Sinclair has delivered! The characters have been dancing around in my head since I finished it and I can’t wait to see if there is more to come (hopefully a series?)
I highly recommend this to anyone who has a soft spot of historical erotica, age play and even domination. While this hot tamale isn’t your tame standard fare for a romance novel, I think it’s worth a read even by those with more meek tastes in erotica, you wont regret it!

★★★★★  Renee @ Amazon.com “Starts out hot and just keeps getting hotter” on May 25, 2015
Absolutely fabulous AP story. Loved the characters, premise, and the world building. You are whisked away to the Scottish Highlands from the first page and you don’t want to leave when you reach the last. Ms. Sinclair has a great understanding of what AP readers are looking for and delivers every time. The relationship between Bran and Glynis is perfect. Bran is dominant but loving, the AP is based in a caring, loving relationship. Glynis is an intelligent character who maintains her ability to use her brain even while engaged in the AP aspect. I did not want this story to end and look forward to the next one.

★★★★★  Book Junkie @ Amazon.com “Loved it” on May 23, 2015
I’m a big fan of anything to do with Scottish highlanders. Books like Outlander are fantasy material for me, so the cover alone made me want this book.
I wasn’t sure if an age play story would work in this kind of setting but it did. Bran McKinnon is forced by the king to marry the spoiled daughter of a rival clan leader, the McKinnons, in order to end the feud between them. When he meets Glynis, he knows she’s perfect for him. He wants a woman he can treat like a child and Glynis is in need of a firm hand.

★★★★★ SH @ Amazon.com “Fantastic AP story!” on May 23, 2015
Another wonderful AP story from Ava Sinclair! The best of both worlds, Scottish Highlanders and AP, so how could you not enjoy?! There is a great story here with danger, suspense, betrayal, romance and love and it’s written very well. Kept me turning the pages until the very end! I loved Bran and Glynis together, the AP wasn’t harsh, and their love and chemistry jumped off the page at you! Nicely done!

★★★★★  Alicia Janowitcz @ Amazon.com “A fabulous read!” on May 23, 2015
Well done! It’s not often I find a historical Scottish age play, which means I was so excited to read it. I wasn’t disappointed. Ms. Sinclair does an amazing job of developing the unusual connection between husband and new wife. Her characterization is strong, her writing is well crafted and of course, writing about a hot Highlander gives this book 5 stars. Again, well done!

I found myself really caring about Bran (hot) and Glynis, the wife he’s forced to marry. She’s a handful but that is no problem for Bran the Bull, as he is called. He wants a wife who can become his little one. It’s hard to imagine that an age play could work in a Scottish highland setting but this is very believable. I hope more is coming from this writer.