The Highlander’s Maiden by Carole Archer 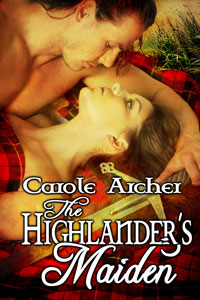 After the death of their father, Colleen O’Shea and her sister Kaitlyn are dragged from their home just in time to escape the invading English. Living in hiding chafes at Colleen, however, and when a foolish decision nearly leads to her capture, she must leave her native Ireland in the company of an old family friend. Then another naïve choice on her part forces her to flee for her life once again, this time all alone in the hard, unfamiliar world of the Scottish Highlands.

It is there, lost and desperate, that Colleen is found by Duncan MacGregor, carried back to the village of this tall, handsome highlander, and given a place to stay. As Colleen starts to adjust to her new life, her defiant nature puts her in constant conflict with Duncan, who has declared himself her guardian. To Colleen’s horror, Duncan is more than prepared to take her over his knee for firm chastisement as often as he feels it is necessary, and she discovers that more serious misbehavior will earn her a much more thorough, embarrassing punishment than just a spanking. Nonetheless, Colleen finds that her feelings for Duncan are growing deeper every day, and she longs for him to claim her as his woman and his wife.

Duncan has been enamored with Colleen since he first set eyes upon her. Each time he is forced to discipline her he can barely contain his desire to take her and take her hard, but he will not bring a woman to his bed without first making her his wife. When a rival lays claim to her, though, he is forced to act quickly, and he soon finds himself the husband of a beautiful, feisty woman—one who he knows will need both his love and guidance and also quite frequently his firm hand applied to her bare bottom.

Duncan held Colleen for a few minutes before eventually releasing her, a stern look spoiling his attractive features.

“Stand up,” he ordered, grasping Colleen’s hand and pulling her to her feet. “Lift your dress, lower your drawers and bend across my lap,” he ordered angrily.

Colleen blushed as she reluctantly complied. She had never had to bare her own bottom and she blushed furiously as she struggled to obey. With tears in her eyes she looked at Duncan before getting into the humiliating position he had demanded.

“I’m sorry,” she whispered, slowly bending across his lap and lifting her skirts out of the way before hesitantly tugging her drawers down around her knees.

Duncan took a firm grip on her waist and rested his other hand on her bare bottom, making her squirm in fear. “You will be sorry, young lady,” he warned. “I told you not to leave the village. There are very good reasons why I don’t want you to stray from here. You chose to ignore me and got yourself taken by the MacLennons. Fortunately they didn’t hurt you, but you disobeyed a direct order and you’re about to learn your actions have severe consequences.”

Duncan continued to lecture Colleen for several minutes and she wished desperately that he would stop talking and get her spanking over with.

Duncan’s hand cracked down hard and she yelped with shock at the unexpected smack. He landed a few more hard smacks, causing Colleen to yelp, before resting his hand on her buttocks and caressing them gently.

Colleen lay still and wondered if Duncan had decided that a very short spanking would suffice. She tried to push herself up but Duncan tightened his grip around her waist.

“Not so fast, young lady. Do you think those few smacks are enough to punish your outright disobedience?” he asked.

Colleen gasped as Duncan once more started to spank her bottom hard, but this time he did not stop after a few smacks.

“I warned you not to leave this village ever without me,” he scolded, his hand smacking down repeatedly on her bottom. Colleen squealed as her legs kicked frantically. Any hopes that he was going easy on her were now long gone.

“I care about you,” he told her, as his hand continued to redden her buttocks. Despite her squirms of pain, Colleen’s eyes lit up as he told her that he cared for her. It was the words she had longed to hear since soon after she had arrived in the village. Taking a deep breath, Colleen vowed to take her spanking well. If it makes him happy he can spank me all night long. He cares about me and that makes it all the more bearable.

2013-04-08
+admin
Previous: Shared Between Them by Korey Mae Johnson
Next: The Mercenary’s Claim by Chula Stone