The Highwayman’s Lady by Ashe Barker 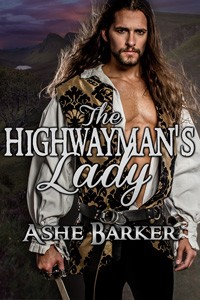 After the death of her mother, twenty-year-old Imogen Bennett faces the prospect of being coerced into marriage by a scheming relative, but fate intervenes when a masked highwayman accosts her on the road. Desperate to escape the unwanted wedding, Imogen pleads with the mysterious, handsome rogue to rescue her.

Alistair Graham is a proud Scotsman who rebelled against British rule, and since the defeat of the highlanders at Culloden he has taken to robbing rich Englishmen travelling through Scottish lands. He is no gentleman, but he is certainly not a man who would ignore a young woman’s pleas for help, and he agrees to do what he can to assist the beautiful girl he has waylaid.

Though Alistair warns her that he expects a woman’s complete obedience both in bed and out of it, Imogen cannot help being drawn to him, and she soon finds herself longing for him to take her hard and thoroughly. When he claims her, Alistair’s mastery of her virgin body leaves Imogen utterly spent yet still aching for more, but after her shock at her own wantonness leads her to speak disrespectfully to him he bares her bottom and punishes her soundly.

A highwayman is no suitable match for a lady, however, and Alistair fears that her association with him can only put them both in danger, so he makes her promise that she’ll tell no one about what took place between them and then ensures that she is delivered safely to the home of her honourable cousin in Kirkleven. Yet despite her best efforts to put Alistair out of her mind forever, in her heart Imogen knows she will always belong to the man who rescued her, mastered her, and made her his. But will her highwayman ever return to reclaim his lady?

“Prior to removing your clothes, did I not ask if you were unwilling to comply with my specific requirements?”

“What was your answer, Imogen?”

“I, I—Aagh!” Another hard spank focuses my thoughts. “I said I was willing, sir.”

I am weeping now, bitter tears of contrition and humiliation. He is correct. I did do and say all those things and I meant them. I loved what we did, the things he did to me. At the time. Now, afterwards, I regret my impetuous and uncharacteristic behaviour and in my confused state I tried to shift the blame to Gray. In the deeper recesses of my mind I cling to the belief that whatever the real state of affairs, a true gentleman would accept responsibility, but, as Gray has pointed out, he could not be so described. So I am to be punished for my duplicity—and perhaps for my ridiculously poor judgement in finding myself in this situation at all.

“Imogen, do you understand now why I will spank you?”

“At last we are getting somewhere.”

He proceeds to drop sharp, stinging slaps across my unprotected buttocks, not too hard at first, but fast gaining in intensity. I squeal, try to reach back with my hands to cover my smarting bottom but he just captures my wrists again and holds them in the small of my back. My kicks and squirming are dealt with in short order as he lifts one solid, muscled leg to cover both of mine and holds me pinned in place, defenceless as he spanks my bottom thoroughly.

2016-03-06
+admin
Previous: Her Master at Last by BJ Wane
Next: Taken and Trained by Vonna Harper