The Hunter’s Mate by Morganna Williams 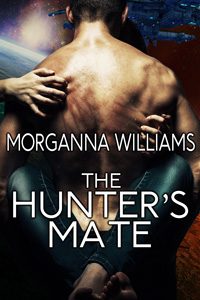 Though he has come to Earth to track down enemies of the Intergalactic Federation, when Hale encounters a human female living on her own in a wild, dangerous land, he takes it upon himself to rescue her and claim her as his mate. But the beautiful, feisty girl will need to be tamed.

Reyna has spent years surviving against all odds in the remote, thickly forested mountains beyond the control of the alien alliance which rules her world, but she stands no chance against Hale’s skill and strength. When she runs from him, the huge, handsome warrior catches her easily and then wastes no time in baring her bottom for a painful, humiliating spanking.

Hale quickly sets about teaching Reyna what it means to belong to a Cantari Hunter, and over the coming days she is punished thoroughly and shamefully for any disobedience and brought to one shattering climax after another as she is made his in every way. But even if Hale masters Reyna’s heart as completely as her body, can his new mate find a place for herself among his people?

Publisher’s Note: The Hunter’s Mate includes spankings and sexual scenes. If such material offends you, please don’t buy this book.

“No, little female, you will take what I give you, nothing more and nothing less,” he told her, his green eyes glittering with little flecks of gold swirling around his slitted pupils. Hale took her hard, giving her no quarter as he drove in and out of her in long pounding strokes, the head of his cock slamming against her cervix with every inward thrust.

His pelvis ground against her clit every time he hit the end of her channel with a twist of his hips. She was gasping out her pleasure as he drove her closer and closer to the pinnacle. Then a finger pushed deep inside her asshole as he hammered in even harder, making her see stars as she came with a scream.

Hale didn’t stop, driving her through that orgasm and building toward another. As he continued pounding into her, a second finger joined the first in her ass, stretching her open. Hale began moving them in and out of her ass in tandem with his cock. She was fuller than she’d ever been and still the pleasure grew until it reached almost painful proportions.

Just as she was about to explode, he completely withdrew and she felt the head of his cock where his fingers had just been. “Hale?” Nervousness filled her voice as she looked up at him with alarm.

“I will possess you everywhere, my mate,” he told her as the head of his cock sank into her most secret place, popping past the ring of muscle as the burning stretch of tender tissues also fired pleasure sensors in her ass she hadn’t know existed. As he worked himself into her with exquisite slowness, the palm of his hand slapped down on her wet, swollen pussy and the band that had been wound so tightly within her snapped as she came hard.

Hale used her orgasm to work his cock all the way into her tight asshole, then he began to move, treating her ass to a good hard fuck as he alternately fingered her pussy and slapped her clit until she came again, every muscle clamping down on his pistoning cock and forcing his own orgasm as she milked him dry with her rippling inner muscles.

When they could breathe again, Hale carried her down to the pool under the waterfall and gently washed her; his tenderness brought tears to Reyna’s eyes.

“Do not cry, my Reyna,” Hale admonished as he sat her on the rock shelf directly beneath the falls so the water cascaded over them. Spreading her wide, he took her again with his mouth while two fingers worked into her ass and two more filled her pussy. He sucked her clit until she screamed herself hoarse for him.

When he had wrung every ounce of pleasure possible from her, he climbed up on the shelf and fisted her hair as he drove his cock into her mouth. He took her mouth as thoroughly as he’d taken the rest of her body, forcing her to swallow all of him as she gagged and tears leaked from her eyes. She reveled in it, wanting nothing more than to please him, sucking and licking everything she could reach as he controlled the pace.

Reyna worked hard to keep her throat open and accept him deeply and when he came, she swallowed every drop her gave her then licked him clean.

2018-03-03
Chris
Previous: Chosen for the Warrior by Sassa Daniels
Next: Shamefully Broken: A Dark Romance by Loki Renard