The Hunter’s Pet by Loki Renard 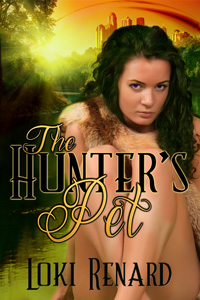 Sarah has lived her life in the wild lands, far from the city-dwellers who regard her as little more than an animal. Making use of her quick wits and the natural camouflage provided by a rare mutation, she has avoided being claimed as some hunter’s pet… until now.

For a man who must venture into the wilds to bring home food for the people of his city, acquiring the right hunting pet can be the difference between life and death. From the moment William laid eyes on Sarah he knew the beautiful green-haired creature was the only pet he would ever want, but training her will prove far more challenging than he could have ever imagined.

William feeds, bathes, and cares for the new pet he has captured, doing his best to win Sarah over with kindness, but when her defiance continues he must resort to more forceful measures and at last he spanks her bare bottom long and hard. Punishing Sarah earns him only a temporary respite from her rebelliousness, but even as her continued defiance drives him to his wits end William knows she is quickly becoming much more to him than just a pet.

To her surprise, living in William’s house brings Sarah a peace she never felt while running wild in the forest. When he teaches her both how a good pet should please her master and how a skilled man can please a woman, she cannot help but yearn for more. But when tragedy strikes and Sarah and William must leave civilization behind, will she stay by her new master’s side?

It felt so nice to be washed that for a few minutes she set aside her animosity and let the hunter do his work. His touch was tender and careful and he spared no part of her from the attentions of his cloth. From under her arms to beneath her breasts he touched every part of her. She sensed no lechery in his attentions, but there was an undeniable intimacy to the whole affair. The soft sensation of the cloth moving against her body, rubbing away aches and pains she hadn’t known were there left her almost as soft and mushy as the cloth itself.

The spell was somewhat broken when William pushed a button to let the water drain away, but it was nice when fresh water flowed down the tub walls and covered her all over again. Sarah watched with no small measure of wonder; somewhere in the back of her mind she had always remembered how things were in the city, but it was so long since she’d seen most of them that she’d thought them figments of her imagination. This was real though, crystal clear fresh water clear of any animal droppings or earthy silt and warm to the touch, cascading down around her toes and filling the tub up around her.

William rubbed soap into a fresh washcloth and handed it to her with a simple instruction. “Clean the parts of yourself you’d rather I not touch.”

She smirked. He was scared of what her mother had called her ‘privates.’ But there were no such things as privates in the wild. Privates were public and she would not have minded had he washed her there.

Suddenly, the temptation of holding a sodden wet soapy cloth in her hand was too much. She did not push it down between her thighs, but instead launched it toward his face. The sound it made as it delivered its watery load was very satisfying, as was the way rivulets of soapy liquid trickled down over his neck and body armor, which he had still not taken off.

“Brat,” he said as water ran down over his stubble and dripped onto the floor. He wiped his face off with one hand. The other caught the cloth before it too could fall and returned it to the water. She watched him, waiting for retaliation. But there didn’t seem to be any. After washing it out again, he pushed the wet soapy cloth between her legs and proceeded to clean her vulva with a firm but gentle touch.

The sensation was very pleasant. Instinct made her hips grind forward against the cloth, and when that slipped away, against his fingers.

“This bath is not for your pleasure,” he chided her gently. His words meant little however, for he did not move his hand away. He kept it there between her thighs and rubbed as she wriggled her hips forward. There was no way to obtain real satisfaction there in that slippery surface, but a little reward went a long way toward alleviating the stress she’d been under since her capture.

“Have you taken a mate before?” The question was asked as his fingertips made swirling motions around the entrance of her body.

“No,” she said softly. She was struggling with the impulse to mate with this man. He was strong and he was in control and as much as her rational mind hated what he’d done, her animal instinct was running completely contrary. She grasped at his arm, wanting him deeper, wanting him to push inside her.

2014-08-20
+admin
Previous: Alice and the Colonel Makes an Amazon Top 100!
Next: The Billionaire and the Waitress by Constance Masters