The Immortal’s Bite by Melody Parks 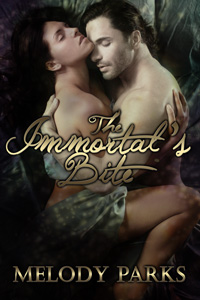 On a drive to Springfield, Cassandra Dare loses control of her car on icy roads and ends up in a cornfield in Kansas. Hurt and disoriented after the crash, she makes her way to a run-down farmhouse. Finding the door unlocked but no one at home, she takes shelter inside and falls asleep, only to be awakened by the pale but incredibly handsome Gregorie Darnsworth.

Gregorie is immediately attracted to Cassandra and sees in her a strong resemblance to his late wife, so he encourages her to at least put something in her belly before going back out into the cold. In short order, the drug he mixes into the warm broth she drinks begins to work and she loses consciousness.

When Cassy awakens, she learns that Gregorie was once a doctor and has been caring for her injuries, but she laughs at him when he claims to be a vampire… until he transports her from his house to her home in the blink of an eye. She is shaken but intrigued—and drawn to his deep, silky voice, hard body, and old-fashioned ways—so she invites Gregorie back the following evening.

Cassy has been waiting for a dominant man who will pay no heed to the demons of her past and simply take her, and Gregorie does just that, showing her it is safe to let a man touch her again and then satisfying her in a masterful way unlike anything she has felt before, bringing her body to the highest peaks of pleasure again and again. Their passion for one another grows quickly, but can a vampire—and all of the darkness that is part of him—really be the man of her dreams, or will she ultimately have to face a life without Gregorie?

She felt the cool touch of his hand on her well-rounded buttocks. His caress was so soft that she almost moaned.

She adored when he used his soft silky voice. She tensed the second his hand left her bottom and squeezed her eyes shut tight, waiting for the slap, but it didn’t come. She opened her eyes and peeked over her shoulder at him.

“Relax, my dear. I’m not going to hurt you.” He reached out to stroke her hair and the moment she relaxed his hand came down on her left butt cheek.

Slap! “I won’t always be able to take the time to explain why I’m telling you to do, or not do something. This will help you learn to listen.”

Slap! His hand rained down on her other cheek. It actually didn’t hurt as bad as she thought it would. It stung a little at first, but then it just tingled.

I can handle this, or so she thought as three more fast, crisp swats landed on each cheek.

“Ten more, my dear. You’re lovely bottom is barely warm to the touch.”

His hand came down again quickly, giving her three more to each cheek, but slightly lower than the last. She grit her teeth, pulling in a seething breath. It was really starting to sting now, and she wanted him to stop.

Smack! His hand landed firmly right in the crease of where her cheek met her thigh. “Fuck!” she cried out. “Enough! That fucking hurts!”

“Those swear words just cost you an extra two, my dear.”

She tried to put a hand back to stop him, but he took hold of it and pinned it to the small of her back.

Three sharp, fast blows landed in the same area on her other cheek, the final one landing back on the other.

“Pretty as a cherry blossom,” he said, smoothing his hand over her fiery cheeks.

Tears stained her cheeks as he helped her up and then cradled her in his arms.

Cassy put her head to his chest and wiped at her eyes. “That really hurt,” she squeaked, trying to get her stuttered breathing under control.

“You did very well for your first spanking, my sweet,” he said softly, kissing the top of her head.

How did he know it was her first spanking? She was just about to ask when he moved her from his lap and lay down with her, pulling her big fluffy comforter around the both of them, cuddling her close in his arms while he kissed the tears streaking her face. “You need some sleep now,” he whispered.

2014-06-08
+admin
Previous: The Marriage Pact by Dinah McLeod
Next: Her Doctor’s Orders by Emily Tilton