The Knight’s Seduction by Renee Rose 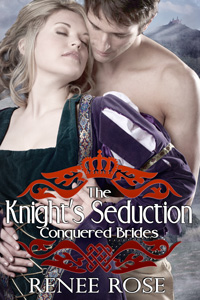 Avowed to never again yield to a man’s ill-treatment, Lady Daisy stands ready to fight to the death when the castle she has long called home is sacked by an enemy army. The imposing knight Sir Barrett has other ideas, however, and to her dismay, Daisy soon finds herself not only disarmed, but soundly spanked as well.

Sir Barrett takes her as his captive bride, but when she shows real terror at the prospect of consummating their marriage, he offers her a bargain. She will offer her body to him and accept the pleasurable torments he inflicts, but he will not claim her fully until she aches for it so badly she begs him. Certain she will do no such thing, Daisy agrees, but can she resist the knight’s seduction?

Publisher’s Note: The Knight’s Seduction contains spankings, sexual scenes, and more. If such material offends you, please don’t buy this book. This book is also available as part of a five-book collection entitled The Conquered Brides.

Sir Barrett’s arms enveloped her, his enormous body dwarfing hers. It felt odd and not altogether unpleasant to be held as if she were a small child. She did not look at Sir Barrett but she could feel his breath against her neck.

“I ought to punish you,” he murmured.

She stiffened as her imagination took flight. That’s right. Despite his courtly manners, he had laid claim to her. Unless she escaped, he would become her husband and master. How would the huge knight choose to punish his wife? What things would he punish for? Would he thrash her? A mixture of fear and something else slithered in her belly. Her entire body grew prickly and warm despite the open window.

She needed to make him understand she could not be a wife. She could not offer her body up night after night for that horrific act. She looked at the door, but remembered his squire stood just outside. Sir Barrett had dropped his armor and sword by her door, but a dagger hung from his belt, just within her reach. Could she use it on him? She doubted it. She shivered and he lifted her to her feet.

“Get dressed now, lady. We must to get on the road or we’ll not make it to Rothburg by nightfall.”

He moved to close the shutters to the window, which still stood open.

Desperation took hold. Without a plan, she lunged forward and snatched the dagger from his belt.

He whirled, his hand flashing out and snatching the dagger. He grasped her arm and slapped the flat of the blade to her backside. “Now you most certainly earned a punishment,” he said, not sounding the least bit angry or even disappointed that she had just attempted to threaten his life. In fact, he seemed almost amused.

Dropping the dagger into his scabbard, he picked her up by the waist and carried her back to the chair. She caught a look of merriment in his eyes just before he tugged her across his thighs and lifted her tunic up her back. His huge paw clapped down on her upturned backside and she jerked, closing her mouth to the squeal that rose to her throat. He applied his hand four more times then created a new panic in her by yanking down her leggings to expose her bare bottom. She struggled against his hold, but he held her fast with an arm around her waist.

He picked up spanking again, slapping one cheek then the other in rapid succession. “We’re going to have a hard time together if you insist on trying to kill one or both of us,” he remarked, sounding quite calm considering how hard his hand connected with her stinging cheeks.

2015-04-18
+admin
Previous: Commanding the Princess by Korey Mae Johnson
Next: The Widow Is Mine by Ashe Barker