The Lord’s Bride by Loki Renard 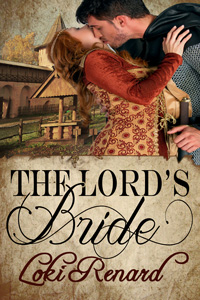 When Mary de Vere’s closest companion Martin de Stafford—whom she secretly loves—is stolen from her by his long-promised marriage to another woman, eighteen-year-old Mary believes things can get no worse… until an assassin’s blade takes her father’s life. The laws of the land place her under the authority of her heartless uncle, but even as her world falls apart around her, Mary vows to one day reclaim her rights and her title.

Years later, Martin, now the Sheriff of Staffordshire and a widower since illness claimed his wife, encounters his childhood friend in the unlikeliest of places: a convent. Though Mary plays the part of a simple woman who dreams of becoming a nun, Martin is far from convinced. He knows the feisty girl far too well to believe that she aspires to a life of service in the church, and in any case, he has another future to offer her—a future as his wife.

When she spurns his affections, Martin only grows more determined to unravel her plot, and at last Mary is caught red-handed in an act of banditry. To save herself from the dungeon, she is left with no choice but to submit to the very thing she once longed for: marriage to Martin de Stafford. Mary soon learns that her new husband is more than her match and that from now on her bare bottom will pay the price for her scheming. In spite of her pride, Martin’s firm chastisement enflames her lust for him, but can she truly force herself to put aside the wrongs of the past and lay claim to a life at the side of the man she always wanted?

“Let us begin your penance.” He took her by the hand and drew her across to the bed, such as it was. Sitting upon it, Martin pulled her across his thighs with a quick tug.

Regret was welling in Mary, as well as a certain amount of fear. This consequence, this was not like any that had come before it. She was accustomed to making good on her escapes, or at least suffering minimal consequences. As she looked down at Martin’s shined boots, she realized that she had been completely out-maneuvered and outwitted by her husband. He must have known precisely what she was doing when they conversed in her rooms. She had thought herself so clever, but it was all part of the rope he had been allowing her to have. Enough rope to bind herself with.

Martin slapped her bottom quite hard, beginning the punishment with a gusto that made her squall from the outset.

“Hush,” he said. “We are barely yet begun. If you insist on crying so, you will soon find yourself completely out of breath.”

With that he continued the thrashing, plying the palm of his hand against the seat of her bare bottom with swift slaps that soon bought pink and red hues to her tender skin. Any single one of them would have been bearable, but laid atop one another, they soon produced a stinging ache that made Mary complain and writhe in her husband’s capable hands.

“Oh, you do not like this?” He paused for a moment to lecture her further. “Imagine how much less you would like the hangman’s noose. Imagine how much more painful a public whipping might be. Imagine all the punishments aptly suited to your crimes, and realize how fortunate you are to be in this cell, under my hand.”

Fortunate was the last thing Mary felt. Sore was the uppermost feeling, followed by shame at having been so neatly caught and embarrassment at the physical fact of being stripped bare and held over her husband’s knee whilst being spanked and lectured.

“You still do not realize what danger you put yourself in, do you?” He smacked low on her seat, urging her hips up and forward over this thigh. “You have no concept at all of consequences, my cosseted little noble. To you, the notion of being truly punished for a crime is foreign.”

“Punishment is for the poor,” Mary squealed as his hand landed once again. “To the victor go the spoils.”