The Man Of Her House by Constance Masters 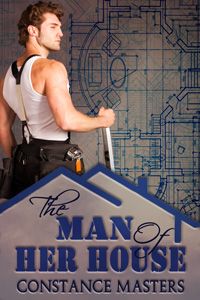 When her abysmal grades leave her suspended from college for the semester, twenty year old Alyssa sees no option but to return to her childhood home, which she expects to find empty while her mother is away. It comes as quite a shock when a man she has never met waltzes in as if he owns the place, introduces himself as Jesse, and informs her that he is living in the home at Alyssa’s mother’s suggestion while completing the repair work she hired him to do.

An even bigger shock soon follows when her refusal to listen to reason lands her over the admittedly handsome interloper’s knee for a sound spanking. Jesse informs her that she is welcome to stay in the house with him, provided that she behaves herself and pulls her own weight. Alyssa has other ideas and is fully prepared to make his life as miserable as she can until he throws in the towel on the whole idea. Unfortunately for her, Jesse is more than ready to back up his warnings with a firm, work-hardened hand applied to her bare bottom as often as necessary.

Despite her wounded pride and her stinging behind, Alyssa finds herself excited by the idea of a man who cares enough to stand up to her and keep her in line. She begins to wonder if Jesse could come to see her as more than a naughty girl in need of discipline, but will her bratty attitude drive him away before romance can bloom, or will Jesse take her in hand and make her his own?

Jesse whipped the scrap of a thong to Alyssa’s knees to join her shorts and then slapped the pink cheeks hard, ignoring Alyssa’s pleading for him to stop. “You want to act like a first class brat? Brats get spanked.”

While Alyssa wriggled and squirmed and complained loudly about his treatment of her, Jesse spanked the pretty bottom up, down, and all over until the light stains from his smacks turned a uniform dark pink.

“I’m sorry!” Alyssa cried as she sucked in ragged breaths. “I only drank one beer!”

The fact that she didn’t get it that it didn’t matter how many of his beers she drank frustrated Jesse to no end, and he clapped the underside of her bottom several times hard to make his point. “It doesn’t matter how many you drank. You shouldn’t have had any at all!”

When Alyssa’s complaints became sobs of what he hoped was contrition along with the pain she must be feeling, he breathed a quiet sigh of relief and stopped spanking. He rubbed her back gently for a few minutes to give them both a chance to get themselves together.

“Is it over?” Alyssa croaked huskily.

Jesse helped her to stand and tried to hug her, but she remained stiff in his arms. “The spanking is, but you still have to clean up your mess.”

Alyssa looked at the floor, refusing to make eye contact.

“Alyssa?” Jesse took her chin between his thumb and forefinger and made her look at him. “You will do it, and I’ll be watching you to make sure.”

“I do say so.” His voice was almost a whisper but held a world of promise. He could empathize with her anger, but he wasn’t going to take her attitude, not anymore. He’d allowed he tor throw her weight around for long enough.

Alyssa stood with narrowed eyes and a giant pout. One hand was cupping her sex as she reached for her shorts and underwear.

Jesse shook his head at her attitude. “You won’t be needing those,” he said quietly. “Wearing skimpy clothes seems to be your thing, so you can do the cleaning with your pants off.”

2013-11-18
+admin
Previous: Swept Off Her Feet: Swift Justice, Book One by Dinah McLeod
Next: The Writer and the Rancher by Chula Stone