The Marine’s Pet by Loki Renard 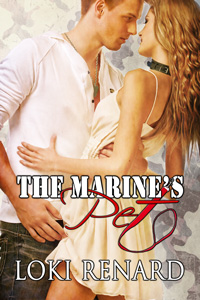 Artist Sarah Digby has always been a free spirit. Maybe the parties she throws get a little too loud and run a little too late, and maybe her little dog has become something of an unholy terror in the neighborhood, but that certainly doesn’t give anybody the right to march into her house and scold her like a naughty child.

But Sarah’s neighbor Austin Black isn’t just anybody, he is a Marine Corps sergeant used to giving orders and having them obeyed. When he finally has enough of her bratty behavior and sassy attitude and takes matters into his own hands, she soon finds herself bare-bottomed over his firm thighs, receiving the first spanking of her life. Afterwards, Austin informs Sarah that from now on he’ll be keeping her in line personally.

In spite of everything, Austin’s dominance leaves Sarah longing for more, and as her submission grows deeper she is surprised to notice that her art begins to flourish like never before. But when Austin makes it clear that he wants her not only as his lover but also as his pet—a pet he will cherish and care for but also train and punish when needed—Sarah is unsure if she is ready to belong to him so completely. Can a girl like her truly surrender her heart to a man who will expect her to kneel at his feet and come when she is called?

“Bend over the end of the bed,” he instructed, his tone devoid of anything besides firm authority. Sarah found herself sinking into the vulnerable position without argument. He lifted up the hem of her skirt and placed it over her back, then slid her panties down under her bottom. There was a curious ritual nature to his movements. He was calm as he prepared her for what she knew was going to probably be quite a sound spanking. After all, she had just agreed to be disciplined by him after messing up so badly she still couldn’t quite fathom she’d done it.

Austin’s palm settled low on her back, then his other hand swung down in a powerful arc and made contact with her left cheek. The result was an immediate sting that was quickly emulated on her right cheek. Back and forth he spanked her for several minutes without a word, until she was squirming in place due to the discomfort of her heated bottom.

“Stay still,” Austin instructed. “Keep your bottom high for me.”

He gave the orders so naturally, as if there were nothing strange at all about a grown woman bending over to have her bottom warmed. Sarah found it hard to believe that she was submitting to the punishment quite so easily, but she really was already quite contrite about her mistakes and the fact that he was spanking her did alleviate some of the guilt.

“Spread your legs,” he instructed.

Sarah spread them a little.

She whimpered as she parted her thighs a little more. The elastic of her panties was pulled tight as her pussy was left entirely exposed. Austin did not touch her there, however; he simply continued spanking her bottom, making sure his palm caught every inch of that sensitive spot low on her buttocks and where her thighs met her butt. Sarah could feel her clit tingling in response to the treatment. It was exciting in the most intimate of ways. With little gusts of cool air propelled by his swatting palm teasing the soft golden down between her thighs, Sarah was caught between the very real soreness of her bottom and a growing excitement.

“Slide a little up the bed,” Austin said.

As she moved up, he hooked his fingers in her panties and drew them down her thighs, leaving them on the floor.

“Keep moving up,” he said, swatting her bottom lightly until she was lying on the bed naked from the waist down, her legs spread wider than before so he could see every part of her pussy and bottom.

The question caught her off-guard and heat suffused her face as she attempted to find an answer. How did it feel to be so exposed and so spanked and so completely under his control? She didn’t have words for it. A little whimper had to suffice in their stead.

“Is your bottom sore?” He smoothed his palm over her cherry-red cheeks as he asked the question.

“Mhm.” He caressed her gently. “And is your pussy a little wet?”

“Yes,” she admitted in an even smaller voice.

2015-05-02
+admin
Previous: Agent Jane and Her Daddy by Rose St. Andrews
Next: Saved by the Highlander by Emily Tilton