The Marriage Pact by Dinah McLeod 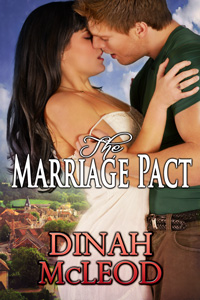 When Shana Davidson’s longtime best friend Brody—now her high-school sweetheart—makes an expected but ill-timed proposal right before graduation, Shana turns him down. Shana believes her refusal is best for the sake of both their futures, since neither of them has had the chance to experience life on their own yet, but Brody is hurt and angry and they part with harsh words that haunt her for years to come.

Returning home to attend a friend’s wedding three years later, though, Shana not only runs into Brody, but with the help of a bit of champagne an odd pact is formed between them: if neither of them are married in ten years, they will marry one another.

After Shana returns to her hometown again nine years later to care for her ailing mother, she does her best to avoid Brody, but her friend Becky has other ideas. Shana soon finds herself playing the role of maid of honor at Becky’s wedding, but it is only on the wedding day that she learns the best man is none other than Brody, and she is left with no choice but to confront him and to confront their painful past.

Even as old wounds heal and love begins to grow between them, Shana must face the fact that Brody is not a boy anymore. He is a strong, dominant man who is more than ready to take her in hand—and take her over his knee for a good, hard, bare-bottom spanking when she needs it. Will she still keep the marriage pact she made almost ten years ago?

“I said I’m going to spank you and that’s what I intend to do.”

His voice wasn’t firm this time, but soft as a caress. I knew if I said no again, he’d listen, he’d let me go—so why didn’t I? I tugged away, but he held me in place easily. I’d been enjoying staring at the solid hunk of a man he’d become for some time now, never contemplating what it would be like to try and get away from him; not that I tried very hard.

“I don’t feel so good,” I admitted, my voice breathy.

“I know, baby. You have a bad feeling in the pit of your tummy, don’t you? You feel bad because of how you acted, don’t you?”

I nodded, ducking my head so that he couldn’t see the film of tears building in my eyes once more. He was right, and add to it the indescribable feelings coursing through me that I couldn’t begin to understand and I was a mess.

“Shana, look at me,” he crooned. His voice lulled me into obedience and the minute he had my attention, he gave me a warm, reassuring smile. “I’m going to make it all better now, OK, sweetheart?”

I nodded and when he took my hand and began walking back toward the bed, I followed. It felt like I was in a dream, a strangely vivid dream where I was about to be spanked and I didn’t mind. Of course, that was only because I didn’t know to mind.

Brody was gentle and sweet with me every step of the way. When we got to the bed, I didn’t know what to expect, but he sat me down on his lap and rubbed circles into my back, murmuring soothingly. “You’re a good girl, Shana—you always have been. This is just a reminder to be good, understand?”

He must have known that I couldn’t take any more talk about it, because he then guided me over his lap and positioned me until I was resting squarely over his knees. “I want you to understand that I’m doing this because I care about you.”

If the warm, concerned tone of his voice filled me with warm fuzzies, the first hard smack that landed on my boxer-clad bottom drove them out. As his hand continued to paddle my butt, the tingling pain drove out all thoughts except the spanking itself. He landed swat after swat, hardly giving me time to catch my breath from the last before the next fell. I was very quickly starting to regret not running when I’d had the chance.