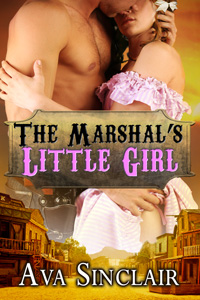 When a young woman calling herself Wilhelmina James shows up at his town’s horse auction unescorted with a lot of sass and a lot of cash, Gage Chandler instantly gets a bad feeling about her. He’s about to blow the small town of Red Horse Gulch to join the US Marshal’s office, and this mysterious visitor is a headache he doesn’t need. After he agrees to check out the pretty blonde stranger to appease a local rancher left angry at being outbid, what Gage finds out about Wilhelmina quickly confirms that she is up to no good. But when she gives him the slip and goes on the run it changes both of their lives forever.

Once he catches up with the little firebrand, it isn’t long before she is over his knee for a hard spanking. As the sexual tension between marshal and outlaw reaches a fever pitch, Gage finds that Wilhelmina’s deep need for submission meshes with his own buried desire to completely dominate a woman, and soon enough he has taken her as much more than just his prisoner.

But Gage soon learns that his captive has a secret. Wilhelmina doesn’t just want to be his woman, she wants to be his little girl. She needs his love, his care, and his firm hand applied to her bare bottom when she is naughty. Though Gage is ready to oblige, the west is a harsh and dangerous place for a woman, even with a hardened lawman like him by her side. Can he keep Wilhelmina safe, or will the shadow of her past prove impossible to escape?

“Who are you working for?” He spoke over her wails as he readjusted his grip and began to aim his swats on the lower portion of her buttocks. When she refused to answer, he began to jerk down her trousers, ignoring her sudden and fevered protestations.

That’s better, he thought. It was about time the little minx showed some contrition. By the pitch of her cries, he could tell she was already close to the breaking point, even before he bared her and went to work on the small bottom with renewed vigor.

It had been a while since he had been with a woman, and the sight of her tight, round ass nearly unmanned him. Gage had become aware of his growing erection. He’d shifted slightly so it wouldn’t jut into her, but now there was no denying that she probably felt it as she lay tightly pressed over his lap, her legs churning as he spanked her.

Wilhelmina was in an open-mouthed, infantile bawl now, and had kicked her trousers free of her scissoring legs.

“All right! All right! I’ll tell you! Just stop!” Her voice was raspy through her cries. “Just let me up!”

He stopped spanking but kept her as she was, pulling the hem of the jacket from where it was flung over her head so he could hear her better. He could see that in her struggles the cloud of blond curly hair had come free of its binding to cascade nearly to the floor.

“You’ll tell me face down over my lap, Billy,” he said. “It’ll save me the trouble of getting you back into position if I don’t believe you. Now talk.” He squeezed a well-punished cheek in warning and she yelped.

“Whose?” He squeezed harder.

“And this Simon… he put you up to this?”

Wilhelmina nodded pitifully, not knowing what was more terrifying—telling or not telling the truth. “He told me to come h-h-here,” she continued miserably. “He told me what to do. He told me to a-a—avoid detection. But you found me out and now I’m in so much trouble!” She burst into tears again and Gage tipped her back up to her feet, turning her to face him.

“What kind of trouble?”

“I don’t want Simon to be disappointed in me!” It was as if she didn’t hear him. He noticed that her voice had taken on a curiously innocent, childlike tone. And he noticed something else, too; Gage had been with enough women to recognize the scent of arousal, and he lowered his eyes now to trail his gaze down her midsection to her thighs. They were slick with a sheen of wetness, and he was astounded. The little firebrand may have howled like a banshee during her spanking, but she had been turned on the whole time.