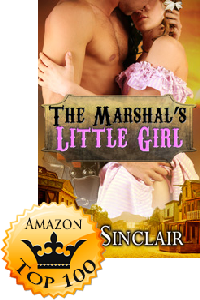 Our first book from new Stormy Night author Ava Sinclair is off to a fabulous start. Less than a week after its release, The Marshal’s Little Girl has already reached the #2 spot in Amazon’s Western Erotica category as well as the #3 spot in the Historical Erotica category. Congratulations, Ava!

★★★★★  Laurel @ Amazon.com “Delightful Ageplay Western Romance, by Ava Sinclair” on March 27, 2015.
This delightful Ageplay story is written by Ava Sinclair and I believe it is her first book in Ageplay. It takes place in the old western days and a young petite woman who calls herself Billy James is caught by the marshal Gage Chandler in a scam. She gets away but he catches up with her and finds out she has been set up by an evil man. The marshal wants to help her and dresses her up as a little girl and himself as a businessman so the evil guy doesn’t get to her. They travel to Texas and Billy who’s name is Wilhelmina discovers that she likes being a little girl and being taken care of by Gage who becomes her daddy. This story has all the elements that go into a well written book like romance, danger, suspense, erotic sex and spanking. I look forward to reading more of this author.

★★★★★  Renee @ Amazon.com “Wow! What a great first book in this genre…” on March 30, 2015
Wow what a great first book in this genre. This was a great combination of old west and ageplay. I absolutely loved it. Billy had been treated so badly by her Uncle and was damaged. Gage was dominant but had no experience with being a papa. His instincts proved to be right but were they enough to overcome her trust issues and keep her safe. I loved that this was new to Gage and that he had to learn as the story continued. With so few books in this genre, this is a keeper and one that will be reread over and over.

★★★★★  LadyReadsALot @ Amazon.com “Really good age play” on March 30, 2015
This book pulled me in with good writing and kept me with a great plot that treats age play respectfully. There are also lots of sex and spankings.
Gage Chandler is a US Marshal forced to track down a woman named Wilhelmina who pulled of a bank robbery right under his nose when he was sheriff. He wants to make her pay for her crimes but there’s instant chemistry between them when he catches up with her. Her submission awakens his dominance and he discovers with the help of a friend that the Wilhelmina is a little one. Gage needs to get her to safety and they disguise as a man traveling with his little girl which makes it easier to live their new age play lifestyle.

There are other characters, lots of punishments and sex and a really sweet ending. My favorite thing is the love Gage showed his little one as her papa. Five stars.

★★★★★  SH @ Amazon.com “Smokin’ HOT” on March 28, 2015
I love a great western book and I love a great age play book and I got very lucky and received both! There is a great story here with danger, suspense, romance, love and it is so HOT! I was drawn in right away and kept on reading until I finished, whew, what a ride! I felt so sorry for Billy, my heart hurt for her but I was so happy when she met Gage. They had a rocky start with some bumps in the road but their chemistry is off the chain! Fantastic!

I’m so glad I did. This book has everything. It’s well written, has great characters that are developed well, all the elements of a Western and the sex and spankings almost melted my Kindle.
The story is a good one. Hunky US Marshal hunts down a thief who isn’t what she seems to be. He’s bringing her back to justice when he learns that his desire for a little one matches her desire to submit. What follows is a really good ageplay story that is explicit and sweet and doesn’t disappoint if you also like action and intrigue.

★★★★★  Tiffany @ Amazon.com ‘The Marshals Little Girl” on April 1, 2015
This is the first Western age play I’ve read. The fact that it was set in this time frame is partly what drew me to it. I also just really enjoy reading age play.

Wilhelmina James aka Billy James is a firecracker. She is a female outlaw on the run from Gage Chandler soon to be Us Marshal. Gage is a man determined to get his man or rather his woman as the case is. Gage is a man of action and knows what he wants even though he never thought that dream would be realized until things heat up between Billy and him.

Sparks fly the moment the two meet. Billy is on the run from more than just Gage. Billy is running from her not so distant past, from herself and what she is. Gage is determined to make the guilty ones meet justice while protecting what is now his.

I couldn’t put the story down. I had to keep reading all the way through until the end. If you like romance, hot sex mixed with danger then this is definitely the book for you. I look forward to reading more of Ava Sinclair’s stories.

★★★★★  Tina @ “Sweet” on April 2, 2015
This was such a sweet story. I loved the relationship between Billy and Gage. It was amazing how easy it was for Billy to fall into the role of a little girl, and be realize it I something special to embrace. I hope to read more from Ava 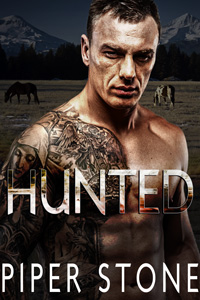