The Mercenary’s Claim by Chula Stone 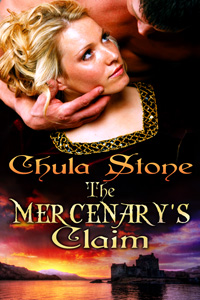 Languishing behind the walls of her father’s castle, Kirsten would have gladly given anything she possessed to defeat their enemies and break the siege… anything except what was ultimately required of her. In desperation and with no other option, her lord father had summoned the fearsome mercenary Gustav Jager and sought to buy his sword with lands and a title, but Gustav had demanded more… much more. He would come to their aid, but only in return for Kirsten’s hand in marriage.

Led from the victory feast as his bride and his prize, Kirsten finds that Gustav has awakened something in her which she did not expect, and to her surprise she does not find her duties to her new husband in the least bit unpleasant. Soon, though, she learns that her body belongs to him in more ways than one, and that he is more than willing to bare her bottom and spank her soundly when her behavior warrants it.

In spite of Gustav’s firm chastisement and his unsophisticated manner, Kirsten cannot help but start to fall in love as he works hard to build a better life for her and for the small band of loyal friends who serve them, and when an old enemy returns to plague her family once more, Kirsten must put aside the spoiled girl she once was and act with the courage befitting the wife of a knight.

Publisher’s Note: The Mercenary’s Claim contains non-consensual spankings of an adult woman, including domestic discipline in a historical setting. If such material offends you, please don’t buy this book.

She moved to the chest thinking to get out her hairbrush and re-arrange her hair but he stopped her with a hand to her shoulder. “Where are you going?”

“To get my brush.” She moved again, but he held her back.

“That’s not the point. You were given instructions. You did not follow them. Do you want me to turn you over my knee again so soon?”

“No! What does it matter to you where I wait for you?”

“Just take my word for it. It matters. Go wait by the fire.”

She looked at him in confusion but complied.

“Stand with your hands on the mantel.”

Feeling silly and embarrassed, she did as she was told. He came up behind her and tucked the hem of her skirt into her belt, exposing her burning bare backside to his gaze.

“What are you doing?” she demanded.

“Examining my handiwork to see if it was thorough enough. A job done right doesn’t have to be done again, isn’t that the way of it?”

She blew out a breath, but held her tongue, knowing without having to be told that if she did not obey, he would most likely spank her again. She never wanted to experience another such session in her life, so she held still. After a few minutes, Gustav came up behind her and lowered her skirts.

“No more lies, Kirsten. Your purpose in all this is to make me look like a nobleman not a fool.”

With that he put out his arm for her, whether in offer or in challenge she didn’t know. Her pride was stung just enough so that, overcoming her anger and frustration at his treatment of her, she took it, blank-faced, frozen. If he meant to spank her to remind her of her duty, she would make sure that she would never fail in her duty again.