The Mercenary’s Girl by Emily Tilton 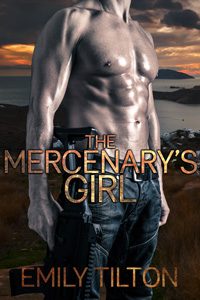 After nineteen-year-old college student Tess Roberts catches the eye of wealthy, powerful arms dealer Jeffrey Young, she soon finds herself learning what it means to belong to a man who will not hesitate to use her beautiful body as thoroughly and shamefully as he likes.

The only man who can save Tess is CIA agent Jack Regensburg, but Jack must remain undercover as Jeffrey’s bodyguard for as long as possible, which means following orders when he is instructed to give Tess a painful, humiliating punishment she will not soon forget.

Publisher’s Note: The Mercenary’s Girl is a short story which includes spankings and sexual scenes. If such material offends you, please don’t buy this book. Also note that an earlier version of this story was previously released by another publisher as part of a multi-author collection entitled Hero Undercover.

She felt something smooth press against her little ring, and she couldn’t suppress another moan of pleasure, which became a wail of discomfort as Jack didn’t spare her, but pushed the first bulb in, opening her and keeping her open, the way Jeffrey’s cock did, but much more insistently, much more forcefully.

“That’s it,” Jeffrey said, with his satisfaction at Tess’ humiliation and pain clearly audible. “That’s what naughty girls get, isn’t it, darling?”

How could he call her darling? Tess had wondered it before, but never quite so forcefully. Darling meant someone was dearer to you than anything. How could it be that when Jeffrey said darling, Tess heard whore, but when Jack said honey, she heard darling?

She cried out again, because Jack had pushed on the plug, so that the second thick ridge opened her anus. She couldn’t. She just couldn’t… “Please…” she sobbed, sure that he would have mercy on her and withdraw the thing. But he kept pushing, made her take it until the narrow part came again and she had two bulbs of the awful thing inside her bottom.

“Do you think you’ll be late again, Tess?” Jeffrey asked with cruel mockery in his tone. How could she ever have found him charming?

“No,” Tess sobbed. Her bottom squirmed and clenched uncontrollably, helplessly trying to expel the rubber intruder, but Jack held it inside her firmly, still pushing, but more gently now. How many more ridges? One? Two? Her bottom felt much too full, and her anus burned to be held open around the plug. The picture in her mind, through Jeffrey’s eyes, made her feel faint with shame: her little bottom full of the lewd disciplinary shaft meant to teach her to behave.

“That’s why I spank them,” Jeffrey said, his tone conversational again as he picked up the thread of his discourse. “They need to understand that they’re here to do as they’re told, whether that’s to be charming and prompt at dinner or to spread their legs and raise their knees in bed, so that my cock can have its way. It’s all about attitude.”

Julian and Ahmad chuckled politely. Judy and Anne-Marie held their silence, and Tess wondered whether they were pretending to find this arousing—the way she herself couldn’t help the clench her pussy gave at the degrading words. Or perhaps even though they never seemed to respond the way Tess did, they couldn’t help feeling the awful pull of Jeffrey’s dominance. As Jack moved the plug gently back and forth in her bottom, perhaps waiting for Jeffrey’s command to push it in further and perhaps wanting to help her get used to it—or perhaps both—she imagined again, helplessly, that Jack had said the thing about spreading her legs and raising her knees. She bit her lip to keep from crying out, as her pussy clenched again, and her bottom with it, and suddenly the discomfort seemed to become something more, something like pleasure.

2017-12-03
Chris
Previous: Heating Up the Holidays by Maddie Taylor, Alexis Alvarez, Morganna Williams, Meredith O’Reilly, and Dinah McLeod
Next: On His Naughty List by Shelly Douglas