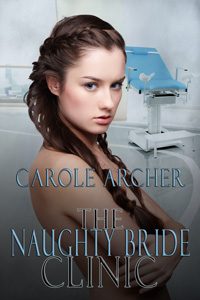 Having long been shielded from any consequences for her lawless behavior by her father’s government position, Olivia has grown used to doing as she likes. But now that her delinquency has finally cost her father his career, she faces the most humiliating ordeal imaginable.

Forced to decide between a hastily arranged marriage to a powerful general and a long sentence at a rehabilitation facility, Olivia chooses the marriage. But before she is allowed to settle into her new life, she must be chastised in a way that both ensures her future good behavior and provides the people she has wronged with the stern, memorable justice they demand.

After a painful, embarrassing, and very public bare-bottom spanking from her new husband, she is enrolled in the Naughty Bride Clinic, where the strict medical staff will assist with her correction. Stripped and put on display, she will be examined, teased, punished, and brought to one desperate, shattering climax after another until she has learned what it means to truly submit. Most embarrassing of all, her treatments at the clinic will be broadcast to the whole country.

The experience will be more shameful than anything she would have thought possible, yet as her helpless, naked body is used, shared, and enjoyed in any manner her handsome, dominant husband sees fit, a part of her cannot help wondering if she is getting exactly what she needs.

Publisher’s Note: The Naughty Bride Clinic is a stand-alone book set in the same late twenty-first century world as Sentenced to the Punishment Clinic, Sentenced to the Nursery, and Sentenced to a Punishment Examination. It is not a romantic story and it is not for the faint of heart. It includes harsh spankings, intense and humiliating punishments and sexual scenes, forced exhibitionism, and strong D/s themes. If such material offends you, please don’t buy this book.

Pouting, Olivia leaned forward, placing her hands flat on the table as instructed. Gazing down at her splayed fingers, she tried to block out all the others in the room. She could hear the reporter muttering away at her husband, telling him what to record and how to do it.

Dr. Eisenberg stepped in front of Olivia. Holding up his hand and maintaining eye contact with her, he stretched a latex glove onto his hand, allowing it to snap it into place. Olivia winced, closing her eyes as he walked to her rear. Her heart raced and she was ashamed that the action had aroused her. “Spread those legs wider apart,” he said, slapping her ass when she was slow to comply. “And be quick about it,” he added, putting his hand between her legs and running a finger along her pussy. “Well, there’s certainly no need for lubrication. You’ve got more than enough of your own.” Mortified at her arousal, Olivia whimpered as the doctor pushed a finger into her pussy, immediately adding a second finger. “I think she’s actually enjoying this,” he said. Ethan stepped closer to get a better look. Olivia glanced up at him, wishing he would intervene and take her away. She didn’t want the doctor’s fingers in her, she wanted her new husband’s cock there. The thought caught her unawares and she clamped her pussy around the doctor’s probing fingers.

“She’s got quite some grip down here,” the doctor noted. “She isn’t a virgin, but train her well and she’ll certainly keep you satisfied in bed.” Olivia’s cheeks burned.

“Let’s see what she’s like back here,” the doctor said. Slipping his fingers out of her pussy, he pressed one against her anus. He found little resistance, probing her rear entrance with his thick middle finger. “She certainly seems very receptive. With enough anal training—and I don’t really think it will take much at all in this instance—you’ll be able to take her however you want. Maybe even threesomes,” he suggested. Removing his finger from her anus, he poked his thumb into her pussy, before sliding the lubricated digit into her anus. His fingers rested against her pussy. Olivia turned her head, looking up at Ethan. “Don’t look so worried,” he said, stroking her hair. “I won’t be sharing you once we’re home. You’re all mine.”

“That’s all very nice,” the doctor said, working his thumb in and out of her anus whilst two fingers moved inside her pussy. “But your exclusivity to your partner will not begin until you leave here.” Olivia frowned and looked up at Ethan but he offered no reassurance this time, instead giving her a sympathetic smile. “Be a good girl,” he urged. Sighing deeply, she shook her head and looked down at her hands.

“Oh, you’re enjoying this, aren’t you?” the doctor said, finger-fucking her anus and pussy hard. Olivia groaned, parting her legs further, pushing up onto her tiptoes as his fingers stretched her anus and pussy. “Bad girl,” he scolded, giving her ass a slap with his other hand. Her arousal increased, and she bucked against his fingers. She was distraught when he slowed down, removing his fingers from her holes before she was able to come. Letting out a frustrated grunt, she stamped her feet.

“Temper, temper. You’re not permitted to come just yet,” Dr. Eisenberg said. “Now let’s deal with those four marks you earned.” Scowling, Olivia turned her face toward the doctor, who had moved to one side.

“General, I want you to stand in front of her and pinch her nipples, just hard enough to hurt,” he said. Olivia pouted, staring down at her breasts as Ethan took her nipples between his thumbs and forefingers and squeezed. Her eyes widened and she looked at the doctor pleadingly. “Owww,” she mumbled, as the pain became too much. She gripped tightly on the edges of the table between them, desperate not to rise from her position and incur the doctor’s wrath.

“Very good, you can let go,” Dr. Eisenberg said, moving around to her rear. “That takes care of two marks. Now let’s deal with the other two.” His fingers plunged into her pussy. He once more finger-fucked her hard, rubbing her clit and pinching the hard nub. Throwing her head back, she groaned as she approached orgasm. She really hoped he was not going to stop again. She was aware of Brandon moving closer with his camera, his wife alongside him nagging and issuing orders, but Olivia no longer cared. “Please,” she yelled, pushing back against the doctor’s hand. “Don’t stop. Please.”

“Pinch her nipples again, harder this time,” instructed Dr. Eisenberg. Ethan’s fingers clamped on her nipples, squeezing tight. Her eyes rolled back in her head and she arched her back as three fingers pushed into her pussy. Suddenly two fingers of the doctor’s other hand entered her anus. Olivia let out a long wail, her body bucking as an orgasm flooded through her. It seemed to go on forever, to the point where tears welled in her eyes. Slumping toward the table, she was relieved when the doctor and Ethan’s hands stopped touching her. She remained on the table for a minute or so, panting breathlessly as her body spasmodically twitched.