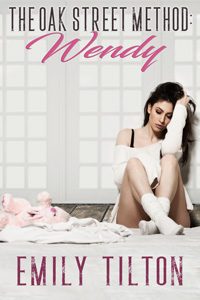 After she is caught loitering and taken into custody by the powerful corporation that all but runs her city, twenty-year-old Wendy Baskin is placed in a special program for wayward young women in need of reform. To ensure she receives the firm correction she needs, Wendy is sent to live with a couple who will act as her strict mommy and daddy during her stay with them.

When she is caught breaking the rules her assigned guardians have set for her, Wendy quickly finds herself blushing crimson as she is given a humiliating chastisement, but the embarrassment of having her bare bottom soundly spanked is nothing compared to the shame she feels when her new mommy and daddy discover that she was deeply aroused by the punishment.

As a result of her wanton behavior, Wendy is stripped naked and thoroughly inspected by her guardians, then informed that she will require the kind of training only the Institute can provide.

Publisher’s Note: The Oak Street Method is a short story which is the first entry in the series The Institute: Naughty Little Girls. The books of this series share the same near-future setting as the books of The Institute Series, but they are stand-alone stories. The Oak Street Method includes spankings, sexual scenes, and age play. If such material offends you, please don’t buy this book.

Her door opened. Daddy never knocked when he came to spank Wendy, even though at other times both Kimball guardians respected her privacy. Thoughts of that respect, though, led immediately to remembering Frankie’s mistake in closing her own door: one rule that seemed universal on Oak Street was that the girls’ bedroom doors must remain open when they were in there together. The Kimballs and the Woods had the rule, as did the Samuelses. Wendy wasn’t sure about the Londons and the Giulianis, but Renee Dalton had told her that Renee’s guardians had it, and so did Delia Chichester’s, Renee’s next-door neighbors. None of the girls felt sure exactly why that rule should be so important, but Wendy and Frankie had recently—since the discovery of the book in Mr. Wood’s desk—theorized that it had something to do with sex.

“Hi, Daddy,” Wendy said, turning from the mirror, feeling her cheeks grow hot. Her mouth twisted to the side as she looked at his shiny brown shoes. Like the other male guardians on Oak Street, Tom Kimball worked in an office only fifteen minutes away, and so he got home for family dinner every night. Usually that made Wendy happy—the exception of course was on nights when Mrs. Kimball had decided Wendy had merited discipline.

Wendy raised her eyes to his handsome, bearded face. She felt her nose twitch with the threat of tears. Why did Mrs. Wood have to make such a fuss? They hadn’t been doing anything!

In the back of her mind, of course, Wendy knew that even though she and Frankie had only been talking, the subject of their conversation might well be the kind of thing for which Mr. and Mrs. Kimball would punish her anyway. The stuff in the book wasn’t the kind of thing that ever got discussed in the Kimball household, but Wendy had the sense that her guardians disapproved of the way sex worked in the modern world.

Sometimes she thought she could hear her guardians making love in the master bedroom down the hall, but the house was big enough that she had never been sure, and it made her face glow to think about it. Those sounds—sometimes like Mrs. Kimball were crying out because Mr. Kimball was punishing her, and sometimes a faint, rhythmic thumping—were much easier to ignore than to ponder.

“Mrs. Kimball says that Mrs. Wood found you and Frances in her room with the door shut.”

Suddenly, in through the open window, from the Woods’ house next door, and undoubtedly from Frankie’s bedroom where her best friend’s own window must be open, came a sharp slap, and then a wailing cry. Wendy couldn’t help the little cry that came from her own throat, nor could she help turning toward the window, though of course she could see only the corner of Frankie’s house because of the angle.

Mr. Kimball walked quickly by her and shut the window, but not before another spank—for it could only be the sound of Frankie’s own spanking that they heard—and another yelp of pain had reached Wendy’s ears. If her face had been hot before, now it felt like a blazing fire. Frankie did get spanked by her guardians, and she was getting spanked right now!

Mr. Kimball closed the blinds. Wendy suddenly wished he could have closed them on her imagination, because she couldn’t stop herself from wondering exactly how her best friend got spanked, and how much resemblance it bore to the way Wendy herself received her punishments. Did Frankie go over Mr. Wood’s knee, even though, like Wendy, she was twenty years old now? Was her bottom bare, or did she get spanked over her skirt, or over her panties?

As her daddy turned back to face her, his hand reaching now for the hairbrush, Wendy’s breathing quickened not only for her own coming discipline session, but somehow for Frankie’s too.

2017-07-15
Chris
Previous: A Strict Gentleman by Jaye Peaches
Next: His Firm Direction by Alexis Alvarez