The Oak Street Method: Frankie and Mary by Emily Tilton 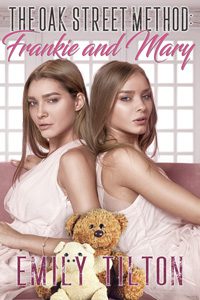 Over the course of the year since they were brought to live on Oak Street in the custody of a strict mommy and daddy, twenty-year-old Frankie and nineteen-year-old Mary have learned the hard way to do as they are told unless they want their bare bottoms soundly spanked.

But when the time comes for the girls to be taken to the Institute to be trained and then auctioned off to the highest bidder, will they need to be reminded of what happens to disobedient little girls even before their new owner sets about claiming their beautiful bodies in any way he pleases?

Publisher’s Note: The Oak Street Method: Frankie and Mary is a short story which is the third entry in the series The Institute: Naughty Little Girls. The books of this series share the same near-future setting as the books of The Institute Series, but they are stand-alone stories. The Oak Street Method: Frankie and Mary includes spankings, sexual scenes, and age play. If such material offends you, please don’t buy this book.

Master S proved just as tall and just as handsome as Master G, but so fair-haired and blue-eyed that Mary thought he must be a surfer when he wasn’t training girls. Of course Mary could only look at those eyes when Master S wasn’t looking at her. Once, as he fastened her seatbelt for her, he caught her looking. How could she help it, when she felt his big hands around her waist, so close to where this whole terrible experience made her burn in her modest panties, under her old-fashioned slip, under her proper blue Sunday dress?

“Did Master G tell you to keep your eyes down?” he asked, his voice full of authority despite it being a little higher and less growly than Master G’s. Before Mary lowered her gaze to the pearlescent buttons on his white shirt, she saw the blue eyes narrow, and that made her cheeks go hot yet again.

“I won’t warn you again,” Master S said. “I can spank you right here in the van if I have to.” It was true: the van was configured with a long upholstered bench stretching front to back along the side opposite the sliding door. The girls sat side by side on the bench now, but one of the masters, it seemed quite clear, could take a seat there and pull a girl over his lap to teach her how to behave, skirt up and panties down.

“That’s alright, sweetheart,” he replied. “I know this is all very new. But it’s important that you learn to follow the rules right from the beginning. Your owner has the right to expect a well-trained girl in his bed.”

Mary looked at Frankie, whose seatbelt Master G had just fastened. She reached out her hand again, just as she had in the bedroom, and Frankie took it, looking sympathetically into Mary’s eyes.

“That’s it, girls,” said Master S. “Help each other through it. The man who buys you will be the kind of master who likes to see his girls show each other lots of affection.”