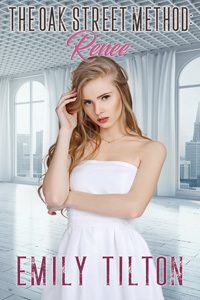 After a year spent living on the streets as a runaway in hiding from the government, eighteen-year-old orphan Renee Dalton is finally caught and sent to Oak Street. Over the coming months, the beautiful, headstrong young lady learns the hard way that willful, disobedient little girls get their bare bottoms very soundly spanked over daddy’s knee whenever they have been naughty.

Renee slowly grows accustomed to her new life, but everything changes when her daddy decides it is time to begin training her to please the millionaire who will one day purchase her. With her cheeks blushing and her bottom burning, she is intimately and shamefully inspected, and before long she is quivering with need as she is shown what it will be like to belong to a dominant man.

Publisher’s Note: The Oak Street Method: Renee is a short story which is the fifth entry in the series The Institute: Naughty Little Girls. The books of this series share the same near-future setting as the books of The Institute Series, but they are stand-alone stories. The Oak Street Method: Renee includes spankings, sexual scenes, and age play. If such material offends you, please don’t buy this book.

Now Bob spoke, his voice quite stern. “It’s time for us to try something new, honey,” he said, taking another step toward her, so that he stood about six feet away. The simple wooden chair in which he sat to administer Renee’s punishments was against the wall; ordinarily at this stage Renee would have to listen to him taking it from its place and moving it out a few feet, before Bob sat in it and called his little girl to him.

“Eight,” Daria told Bob, glancing at the rising number in the upper right of her screen. Yes, as predicted, the very idea of newness in association with this command to pull her panties down and raise her nightgown had begun to have the desired effect.

“Your mommy and I think we need to try to get through to you some different way, since spanking alone doesn’t seem to be improving your behavior. We think maybe if you feel ashamed of yourself, when you give us that unbecoming attitude of yours, it might sink in that things need to change around here. From now on, before I spank you, and after, I’ll take a look at your bottom, and at your little pussy, too, and we’ll talk about the responsibilities a lovely young lady like you has, when her body has developed, as yours has, so very sweetly.”

Renee’s body visibly tensed. “Seven,” Daria said. She looked at the fight-or-flight scale, which had just ticked up. “Give her a moment.”

Bob paused, looking into Renee’s eyes, still massaging his right hand as a reminder to his little girl of the coming punishment.

“Go, Carol,” Daria told the mommy who waited at the top of the stairs. Carol began to descend, her footsteps startling Renee, who turned her head a little further to see her mommy enter the living room through the door to the hall. Carol wore a bathrobe over her own nightgown, and had a bright smile on her face that she quickly—and almost theatrically—turned into a frown when she saw Renee in the corner.

“Eight,” Daria said with satisfaction. The presence of Carol would make this transition seem more natural and less menacing, for all its unexpected and lascivious nature.

“Mommy,” Renee instantly pleaded, the hardness of her defiance forgotten with the opportunity to take her case to her other guardian and play the two of them off against one another. “Daddy says he’s going to… to look at me!” She shot Bob a resentful look, but he remained impassive, looking to Carol with slightly raised eyebrows, so that Renee, clearly so sure that her mommy wouldn’t have authorized the inspection, now showed some alarm.

“That’s right, honey,” Carol said, nodding. “We need to find some way to get through to you. I talked to some of the other mommies, and they said that it might be a good idea to make it clear to you that you’re our little girl this way. The Kimballs inspect Wendy before Mr. Kimball spanks her, and Mrs. Kimball says it’s done a world of good.”

It represented the key moment, and Daria hoped Renee’s potential owners would watch it over and over: the instant an Oak Street girl realized her friends shared the special, embarrassing secret that even as eighteen- and nineteen-year-olds they still received regular bare-bottom discipline. Renee’s eyes went wide and she swallowed hard, before her face returned to its bratty demeanor.

“Yes, honey,” Carol said. “Just like you. Now go ahead and pull your panties down. Daddy and I will both inspect you now.”

2018-08-11
Chris
Previous: Taken by the Warriors: A Dark Sci-Fi Romance by Marlee Wray
Next: Marked and Mated: An Alpha Shifter Romance by Delta James