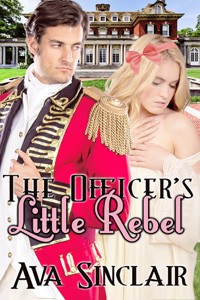 It’s a bittersweet homecoming for Major Royce Kingsley, who returns from a military campaign to find his family’s proud reputation damaged by the actions of a disinherited brother. But Royce still has his estate, his fortune, and most importantly, his honor. So when a rare moment of indiscretion on his part ends in the drunken seduction of a beautiful, innocent innkeeper’s daughter, he sets out to do the right thing and take the young woman as his wife.

Nineteen-year-old Imogen vowed long ago that she would never make the mistake her mother did by trusting a man—any man—to treat her kindly. When Royce informs her that he is going to marry her, her first instinct is to resist. But Royce is not a man to be put off from doing what he believes is right, and Imogen’s defiance merely earns her a painful, embarrassing bare-bottom spanking from the handsome officer.

Royce quickly realizes that Imogen is in desperate need of both firm-handed discipline and gentle, loving care, and he decides that she will be returned to the nursery until he is certain she is truly ready to be his wife and the mistress of a large estate. Soon enough, Imogen is blushing crimson as she is stripped bare, bathed thoroughly, dressed as a little girl, and spanked soundly whenever she is naughty.

Despite her best efforts, Imogen cannot resist her body’s utterly shameful response to her future husband’s dominance. As she is made to surrender herself to Royce ever more intimately, each quivering climax only increases her need for him to claim her completely. The peace she soon feels as Royce’s little girl is unlike anything she has experienced before, but can Imogen trust her new papa to protect her when an old enemy plots to tear her from his loving arms forever?

“No! You mustn’t!” she protested, turning her panicked eyes to Royce Kingsley’s stern gray ones. But he was unmoved, and before Imogen knew it, her traveling dress was unbuttoned and off, followed by her thin undergarments, stockings, and slippers.

She was naked before these two people and—horrors!—now the awful woman had produced two leather straps and was affixing one around Imogen’s left ankle. Imogen could only sob helplessly as first one ankle and then the next was secured to the foot of the bed, spreading her legs wide. Major Kingsley sat on the bed beside her, soothing her now as he explained what was about to happen.

“You have chosen to behave as a sullen child, and so a child you shall become. And as we know, children are bare below, as you shall be.”

Imogen understood now the reason for the razor, and could only watch in helpless humiliation as the tall nurse leaned over to brush shaving cream on her plump pubic mound. The bristles tickled, and in spite of Imogen’s fear, the throbbing between her legs could not be denied.

“There’s more than a bit of cream here,” the nurse said frankly. “When this one’s ready to act as an adult, she will be more than willing.”

Imogen moaned, realizing that the nurse was referring to the wetness she felt slip unbidden from her throbbing core. That she could be so flushed and needy after just one tumble with this man, and under these circumstances… she turned her face into the bedclothes and scrunched her eyes tight in mortification at her body’s unbidden reaction to their handling.

“Nooooo.” It was the only sound she could utter as the razor sliced the hair away to reveal buttery soft labial skin. Imogen glanced up just long enough to see Major Kingsley’s eyes following the path of the razor. She felt his hungry gaze plundering her as surely as his cock had done, for in the inn it had been dark, and he’d not been able to look upon her there. But now, bound and spread, her charms were on full display. She groaned in humiliation, knowing that once shaved bare, she could not hide what he must notice—the slick, engorged inner lips, tinged with her dewy desire.

But the embarrassment was far from over.

“She’ll need a good cleansing when she’s settled,” Miss Quinn was saying, “but until we can flush her bottom, I’ll put in this bolus.”

Imogen cried out and tried to evade fingers now worming their way between her bottom cheeks to press something against the puckered nether hole. The pressure built, and when she squirmed, the nurse slapped her sharply on the thigh; the surprise of the pain gave the older woman the distraction she needed to push whatever she was holding inside. There was a sting, then a feeling of fullness. Imogen felt hot tears course down her face as the pill was pushed so deep into her that she knew there was no way to expel it.

“Since you won’t eat, you will get your vitamins through your bottom,” the nurse said.

2016-01-09
+admin
Previous: The Warrior’s Woman by Vonna Harper
Next: The Lawman’s Lady by Kallista Dane