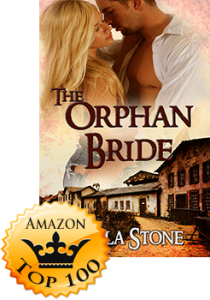 Chula Stone‘s The Orphan Bride has made not just one, but TWO Top 100 lists on Amazon! This original post-apocalyptic spanking romance, set in a place that once was Texas, has been running up the charts on both Western Romance and Fantasy Romance (the book combines elements of the Western and Sci-Fi/Fantasy genres). Congratulations on these amazing rankings, Chula!

This book has an interesting plot concept which I found to be intriguing. As I did not read the book description first, it took me a little bit to grasp the reality of the world I was reading about but once I “got it” I enjoyed the story. I really felt for Ally, she had struggled alone for such a long time and really had no idea how to live in a community with people and her struggles were believable. Josh had his own issues from his past but it was apparent that he really cared about Ally. They develop feelings for each other and their love grows. This is a good read, not as in depth as I prefer, but a good read none the less. I received this book from Stormy Night Publications as an Advanced Reader Copy.

I liked this story a lot. I have often thought that if there was some kind of cataclysmic event, mankind would probably revert back to the three basic needs. Food, shelter, and water being most important. I also agree that women might be scarce, so would become sheltered, treasured, protected, as well as naturally dominated by the males in their lives.

This story had a different type of plot then you usually find with DD novels. Set in a post war earth, the story revolves around a community call “The Ridge” and how they work together to survive. Part of this is the rules and discipline that are set up to keep peace between members of the community. Josh finds Ally, who has been living alone in the “wild” for seven years. He takes her back to “The Ridge” and married her to keep her safe. Ally has to learn the ways and to follow the rules of the community and it is up to Josh to give her “guidance” which is done with spanking. It was a different type of story and I enjoyed it. I would recommend it to other readers.