The Pirate’s Captive by Maisy Archer 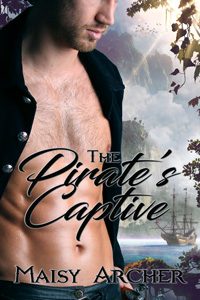 When a notorious pirate demands a ransom from her family in return for lifting his blockade of the local port, twenty-one-year-old Evelyn Hollywell takes matters into her own hands. Her plan to thwart the lawless rogue quickly goes awry, however, when she is carried off from her home and held as a captive aboard his ship.

Evelyn soon discovers that while the handsome buccaneer has no intention of doing her any harm, he will not tolerate disobedience, and when she attempts an escape she ends up over his knee for a painful, embarrassing spanking in front of his entire crew. Though the stern punishment infuriates Evelyn, she cannot help wondering what it would be like to be mastered much more thoroughly, and before long she is blushing crimson and quivering with desire as he teaches her exactly what it means for a beautiful lady to surrender her body to a dominant man.

Despite her growing attraction to her captor, however, his plans for her remain a mystery. She is to be delivered to a man in Boston, but she knows neither who he is nor what he wants with her. All she can be sure of is that with each passing day she feels less like a prisoner and more like a priceless treasure. But will old enemies or the dangers of the high seas tear her from her lover’s arms?

Publisher’s Note: The Pirate’s Captive includes sexual scenes and spankings. If such material offends you, please don’t buy this book.

With his free hand, he grabbed a handful of my skirts and pulled them up, and then he ran his hand up my stockinged calf. He paused when he reached the edge of the stocking, his fingers trailing back and forth along the bare skin at the back of my knee. I hadn’t imagined something so simple could be so devastating, but it was.

And then his hand slid up.

I sucked in a shuddering breath as his hand trailed higher, up my thigh, taking my chemise with it.

Dear God. He meant me to be… bare?

It was too late for protests, for objections, for any return of reason or common sense. I could hear Aunt Beatrice’s voice in my head calling me wanton and wicked, but I didn’t care. I wanted him to touch me. I wanted him to want to.

And he didn’t disappoint. Up and up and up, while my heart banged against my ribcage, and I knotted my fingers in the sheets, until I could feel the touch of cool air against my backside, and I knew that he could see all of me.

And then… he stopped.

Minutes, hours, passed. I waited, my body tensed in preparation, for the first stinging blows to fall. I could hear nothing but the harsh sound of my own breath. Had he changed his mind? Would he…

I cried out. I couldn’t help it. He’d struck at the sensitive area at the top of my thighs, at the exact moment I’d begun to relax.

I drew in a deep breath and tried to brace myself, to accept this punishment as stoically as I had the first, but I couldn’t. Fatigue, terror, shame, and arousal left me defenseless.

Blow after blow rained down, those callused hands as hard and unrelenting as blocks of wood, blistering each inch of my bottom with painstaking care and delivering his message without saying a word. He would not tolerate my disobedience. He would not compromise until every single part of me swore fealty to him.

This was beyond anything I’d ever felt before. Each stroke was a lick of heat that faded to a dull ache when he moved on to the next area, only to explode into fire again when he returned to it.