The Pirates of the Jolie Rouge Trilogy by Normandie Alleman 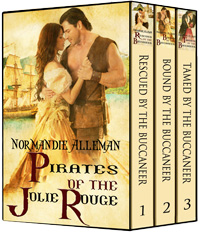 The Pirates of the Jolie Rouge Trilogy includes three deliciously sexy books by USA Today bestselling author Normandie Alleman which tell the story of feisty Frederica Beauchamp and Gaston Galette, the pirate who rescues her from captivity, masters her body, and captures her heart. The books of the trilogy are:

Rescued by the Buccaneer

When Frederica Beauchamp boards a ship for the Americas in 1665, she dreams of a life filled with adventure, but she gets more than she bargained for when the vessel is attacked by pirates. The heartless men kidnap her and force her to serve their captain, and though he does not have his way with her, the villainous brute delights in stripping her, shaming her, and thrashing her bare bottom as punishment for every imagined disobedience.

In the depths of despair Frederica is rescued by the gallant Gaston Galette, who introduces her to passions she never knew existed. As he watches the proud, willful Frederica bow to his authority, however, Gaston worries that her growing hold on his heart will be his downfall. He knows he cannot take a woman with him when he returns to his ship and crew, but as Frederica accepts his lustful dominance completely, submitting to him with grace and beauty no other woman could match, Gaston realizes that he may never be able to let her go.

Bound by the Buccaneer

Two years have passed since Frederica joined Gaston aboard the Ocean’s Knave, and with every passing hour they have fallen more deeply in love. By day she is the ship’s physician, but at night she serves her captain in his bed, offering her body for him to punish and pleasure until she begs for more. But after a successful run of raiding other pirate ships, the couple have a target on their backs.

Their only hope is to form an alliance with a trio of like-minded captains, but in order to guarantee the cooperation of these unyielding, battle-hardened men, Gaston is forced to offer them a night with Frederica. Reluctantly, she agrees to be shared with the men, but afterwards Gaston finds it difficult to forgive himself for bartering Frederica’s charms. As jealousy and desperation threaten to consume him, will Gaston lose his beloved Frederica or can he weather the storm and find a way to bind her to him forever?

Tamed by the Buccaneer

Life as a buccaneer in the Caribbean in 1668 is not for the faint of heart, but at least Gaston Galette has a beautiful wife at his side and in his bed. During the day she serves as the ship’s physician, while at night in his cabin she is his saucy yet submissive wench.

But after countless brushes with death, Gaston has begun to wonder if it might be time to give up swashbuckling for good. Strong-willed Frederica disagrees, but will she allow herself to be tamed by the buccaneer?

Publisher’s Note: The Pirates of the Jolie Rouge Trilogy includes spankings and sexual scenes. If such material offends you, please don’t buy this book.

Read a Longer Sample from Rescued by the Buccaneer

Read a Longer Sample from Bound by the Buccaneer

Read a Longer Sample from Tamed by the Buccaneer

Excerpt (from Rescued by the Buccaneer)

“How dare you!” Frederica glared at Gaston.

“Excuse me?” He glared back and dabbed at his bleeding cheek with the hem of his shirt. “Me? I believe you are the one who has gotten us into this mess.”

“Me? I’ve done no such thing. You’re the one spouting off to everyone about Humphrey not bedding me. You’re the reason I’m in here, you rapscallion!” Fear and anger bubbled over and she launched herself at him, beating her fists against his chest. “This is all your fault!”

Grabbing her wrists, he stopped her blows and pulled her to him. “It is not! He suspected you from the beginning!”

Gaston sat on a crate in the corner and twisted her body over his knee.

“Stop! What are you doing?” she shrieked.

He pulled up her skirts. “Punishing you.”

“For what?” She struggled under his grip, but he was stronger than she was, and her efforts did little good.

“For being such an insolent brat.”

“Don’t you dare!” she squealed, kicking her legs. “Unhand me this instant!”

“Clearly. Why else would you rat me out to your captor?” He threw her skirts and petticoats up over her torso and ran his hands from her thighs up to her naked bottom.

“I did no such thing.” She felt her face redden as she realized he must be gazing upon her bare bum.

“Frederica, I must say, you have a lovely derriere.” He sounded amused.

“Stop this impertinence at once! Turn me loose, you scoundrel!” She attempted to get up, but he held her down. The dank, musty odor of the cell accosted her nostrils.

“I shall do no such thing, at least not until you’ve been properly reprimanded for your betrayal.”

She exhaled loudly. “I did nothing, I tell you! Now let me go, you letch!” She wriggled again, this time with less gusto.

He smoothed her cheeks with his palm, ignoring her pleas. “I do like the access this provides me.” He dipped his hand between her legs, caressing her inner thighs.

She took a deep breath and a slight moan escaped her lips as she exhaled.

“I can see that you’re wet,” he said, then whispered, “I knew all along you were a lascivious lass.”

“I shall do no such thing. It’s time for your punishment, no more stalling. A good spanking is precisely what you need, my girl.”

She shrieked in protest, but that did not stop his hand from landing on her bottom with a loud slap.

The blow jarred her, and she reached for his leg nearest to her. She grabbed it with the intention of biting him, but thought better of it. Instead, she clutched his muscular calf through his pants leg and closed her eyes.

He smacked her bottom again. Pain seeped across her skin and she tried not to cry out. It wouldn’t do to give the man the satisfaction of hearing the agony in her voice.

He swatted her aching rear over and over again, and her ass felt as if hot coals lay upon it. She longed to push his hands away, for the blows to cease, but she stubbornly refused to scream.

Then he stroked her buttocks, easing the discomfort. “Now, my little captive, can you behave?”

2018-11-30
Chris
Previous: Alien Daddies Takes Custody of a Top 10 Spot
Next: Blushing for Her Masters by Samantha Madisen