Don't Miss
Home / Blog / The Power of the Pack: A Shifter Menage Romance by Maggie Ryan and Shanna Handel

The Power of the Pack: A Shifter Menage Romance by Maggie Ryan and Shanna Handel 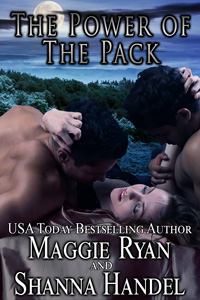 With an ancient evil once again threatening to destroy everything she loves, Cassandra Ambrosia grows ever more determined in her search for the truth about herself, and at last she makes a discovery which could hold the key to finally breaking the curse on her family forever.

As Cassandra continues her hunt for answers, however, her mates struggle to keep their headstrong little human safe from both her enemies and her own recklessness. Deo and Draco do not hesitate to correct Cassandra as thoroughly and shamefully as they feel it necessary, yet even when her cheeks are blushing crimson and her well-punished bare bottom is sore both inside and out, she cannot help delighting in the hard, dominant lovemaking of her two alpha mates.

But the final battle is drawing nearer with every passing day, and even a wolf and a dragon cannot overcome the foes who approach on their own. If the Ambrosia family hopes to survive, they will need more than just their skill and courage. They will need the power of the pack.

Publisher’s Note: The Power of the Pack is the third book in the Shifters’ Call series. It includes spankings and sexual scenes. If such material offends you, please don’t buy this book.

“Spread your legs,” Deo ordered, his hand already resting on my bare flesh. “We want you to remain completely open, hiding nothing.”

The moment I shifted my feet apart, I could feel the air wafting across my pussy and knew that his eyes were looking at my sex even as I felt his fingers dipping into the cleft of my ass. Despite the involuntary instant tightening of my muscles, he easily found his way to my anus, the pad of his fingertip pressing against my opening.

“You know better,” Deo said. “Clenching is not going to keep either my finger or the ginger root out.”

Experience had taught me he was correct, but I just couldn’t seem to help it. There was no other word for it… it was extremely embarrassing to know that both my pussy and my anus were visible. Even worse, I knew that not only was my most intimate opening going to be invaded by his fingers, it would be forced to open wider to accept something that was meant to be used in cooking… not to reside inside my ass. As if to reinforce that thought, I suddenly caught a whiff of the sharp, tangy scent of fresh ginger. Opening my eyes, I saw a long grayish peel fall to the floor in front of my face. Arching my head a bit, I could see Draco leaning casually against the mantel as he worked his knife around the root.

So engrossed in what he was doing, it took me a moment to realize that the shift in my attention had me relaxing my muscles, but the instant my opening was breached, I couldn’t contain my squeal. My protest was met with Deo’s finger delving deeper into my ass.

“We’ve only just begun,” Deo said, twisting his finger inside me, pulling it out a bit only to press into me again… and again. “If you’re going to make all those little squeaks and squeals with just a single finger, I’m wondering what sounds you’ll be making before I allow you off my lap.”

“Much louder ones would be my guess,” Draco offered. “A few more minutes and I’ll have her root ready to take your finger’s place.”

I clamped my lips closed, making a vow to myself that I would remain quiet, accepting my punishment with dignity. It wasn’t all that awful… just had startled me somewhat. After all, I’d had much larger things than a finger inside my bottom before. My mates were both well-endowed and had sunk their cocks into that forbidden channel on more than one occasion and… well, I’d enjoyed it. As a second finger joined the first, the two scissoring to begin to coax my sphincter to relax, I bit back a moan and took deep, calming breaths. I wasn’t sure how my mates would react if they knew that I was now positive that this wasn’t going to be anywhere near as horrid as I’d first believed. Only when I saw Draco drag the tip of his knife across the surface of the exposed white flesh of the root did I speak.

“Why are you doing that?”

“I’m scoring it,” Draco explained, turning the root in his hand to continue his cuts on the other side. “It allows the juices to flow more freely.”

“Oh,” was all I could manage as his talk of juices flowing had me conscious of the fact that my pussy was damp from Deo’s touch, his preparations for my punishment stirring my arousal. Evidently, my attempt to keep that little fact to myself wasn’t successful because I heard a tsking sound coming from Deo.

“Our girl seems to be forgetting she is being punished. I can not only smell the ginger, I can smell Cassandra’s arousal.”

2018-06-02
Chris
Previous: His Bride’s Shameful Training by Emily Tilton
Next: The Viking’s Possession by Felicity Brandon