The Predator’s Pet by Vonna Harper 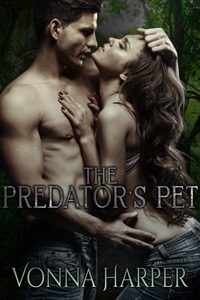 As a member of her rigidly structured society’s lower class, Callie Sterns is used to being ordered around, but she has never met a man as utterly dominant as Darek Dalton. Though she is shocked to be taken over his knee for a bare bottom spanking on her first day working for him, however, she cannot hide her helpless arousal during the painful, humiliating chastisement.

Having managed his preserve for endangered predators for years, Darek knows the dangers of treating wild animals like pets, and when Callie continues to do so she soon finds herself wearing nothing but a leash, collar, and tail as she learns the hard way that he expects to be obeyed.

Yet even with her cheeks blushing and her bottom burning, Callie’s need for Darek only grows stronger, and when he claims her at last his hard, savage lovemaking leaves her totally spent and deeply satisfied. But will he ever see her as more than just a disobedient pet in need of taming?

Publisher’s Note: The Predator’s Pet includes spankings and sexual scenes. If such material offends you, please don’t buy this book.

His command pulled her back to the present. After blinking several times to clear her vision, she acknowledged a multitude of slim strands connected to what looked like an oversized teardrop. When he pressed the solid teardrop to her mouth, she stuck out her tongue. Understanding came one lick at a time.

“A pet has a tail,” he said. “I want yours to be memorable, for you to never forget how you looked wearing it.”

Her buttocks clenched. It took all she had not to bolt or beg. Master had made up his mind about how he intended to deal with what he considered her disobedience. There was nothing she could say.

“That should do it.”

He drew the silken strands over her cheek then trailed it down her back. When he reached her ass, he slapped her.

When she was in position, Mr. Dalton drew one trembling ass cheek away from the other. That done, he placed the plug at her rear entrance and pressed. Unlike when he’d used his finger, the lubricated plug easily made entrance. Being stretched back there was far from comfortable and yet…

Not believing her response, she forced herself to focus as he turned the plug about, going deeper, making a lie of her body’s natural resistance. She should have paid closer attention to its size. It seemed big, huge, much more than her ass could possibly accommodate.

It continued to plow into her, holding her apart. Forcing her to accept.

“I guessed at the size,” he said conversationally. “I’m certain you would have selected something much smaller, but I wanted to make sure you couldn’t extract it on your own. Getting there. Not much longer.”

Hopefully he didn’t think she wanted to hear that. Even as the unrelenting invasion continued, she silently willed it to end. This wasn’t happening. It was part of the most realistic dream she’d ever had.

With no warning the stretching, pushing sensation ended. Her puckered flesh settled into place. The burning sensation backed off, allowing her to fully acknowledge what had happened. The tear-shaped plug was lodged inside her. Thankfully the base was so small her opening barely burned, but he was right, the only way she could get it out was by pulling it, which she was certain he wouldn’t allow.

Distracted from defeat by a tickling sensation, she acknowledged the hair-like strands on the backs of her legs that served as a tail.

“Step one accomplished.” He patted her buttocks. “It looks even better than I thought it would. You’d make quite the show pony.”