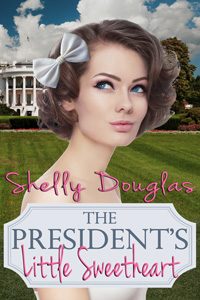 When President David Buck sees his secretary’s assistant, twenty-five-year-old Cassie Miles, surreptitiously smoking a cigarette outside his Oval Office window on a cold January day in 1966, his desire to lovingly dominate a woman returns for the first time since his wife’s death.

Receiving a stern lecture from the most powerful man in the world brings a blush to Cassie’s cheeks, but the idea of being chastised like a naughty little girl arouses her deeply and over the coming days she cannot get the thought of being taken over the president’s knee off her mind. Her fantasies become reality soon enough when her sharp tongue gets her into trouble and David bares her bottom and spanks her soundly, informing her that from now on he will be the firm, loving daddy she needs.

Before long David is bathing his little girl, caring for her when she is sick, and spanking her bare bottom whenever she is naughty. Cassie delights in her daddy’s attention, and being taken in his arms is better than she would have ever thought possible, but as their relationship deepens David and Cassie face the scrutiny of political friends and foes alike. When it becomes clear that there are more sinister enemies lurking in the shadows who will stop at nothing to gain power, will David have to choose between his love for Cassie and his ability to lead the country?

“Lift up your nightgown and slide those underpants down, please,” he said softly, opening the end table drawer.

As she complied and heard the loud snap of a latex glove, Cassidy whirled her head around to see what was happening. David’s wet finger slowly swirled, teasing her smooth anus, and her rosebud quivered under his gentle touch right before he pressed inside with deliberation. Knowing he was going for punishment rather than pleasure, a whimper escaped from deep in her throat, and she squirmed defiantly, earning her a brisk swat of disapproval.

Cassidy’s body snapped upright as he walked behind her. “Oh, my God! What in the hell is that?”

“Get back into position, please, and watch your tone,” he scolded, placing his hand on the small of her back. “I’m going to insert this device into your beautiful little bum, and there it will stay while we eat breakfast this morning. I think it will be appropriate for you to squirm with this inside your heinie while the staff is around. Maybe the discomfort will help you realize that their job is to keep us safe.” He paused, studying her trembling backside. “Now be a good girl, reach back and separate your cheeks for me.” David generously lubed the silicone butt plug, touched the cool tip to her warm, smooth rosebud, and gently pushed it in between her pillow-like mounds.

Gasping, she spun her head around to stare with wide eyes. “This is not an appropriate punishment for a little girl.”

“Since your excursion was extremely adult-like, I think you’re absolutely eligible for grownup discipline.”

“Shouldn’t we be getting ready for church?” she added defiantly, attempting to stand.

He kept a sturdy hand on the small of her back. “I think we can miss one week. Now, behave yourself—inhale deep and blow it out. You need to take your punishment like a big girl.” His commands were soft but firm, making it clear that it wouldn’t be in her best interest to disobey him.

A heartfelt sob escaped her throat as she finally relented, blowing out a dramatic long breath as the foreign instrument stretched and burned, moving through the narrowed dark channel until it finally seated itself completely within her. “It’s bad enough that you bought this thing,” she spat out through closed teeth, “but inserting it on a Sunday morning is purely diabolical.”

“And here I thought my timing was impeccable.” His tone was light as he removed the glove and tenderly patted her bottom before tugging on the base of the plug.

“How long do I have to wear this accessory?” she asked, twirling around to face him.

David pulled Cassidy to his chest and hugged her. Nudging her head under his chin, he kissed the top of it. “Let’s have our next discussion after breakfast.”

Her anus clenched around the plastic intruder. “My punishment isn’t over?”

His grin was one-sided as his fingers stroked the thrumming moist ache between her trembling thighs. “We’ll see, pumpkin. We’ll see.”

2017-02-05
+admin
Previous: Wedded to the Warriors by Sara Fields
Next: The Captain’s Lady by Chula Stone