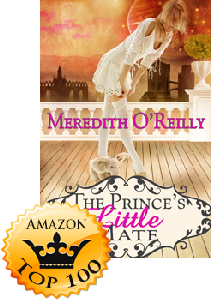 ★★★★★ SH @ Amazon.com “Great read!!” on December 21, 2015
I really enjoyed this sci-fi romance! The plot dragged me in from page one and I was hooked. The story offers romance, danger, suspense, and quite a bit of steam. Prince Eric goes above and beyond to learn what Allison needs from a man and believe me, Allison doesn’t make it easy. I laughed and cheered and enjoyed the read!

★★★★★ Amazon Customer @ Amazon.com “Well Done and Full of Surprises”  on December 20, 2015
I was excited to see what M.O. could do with a sci-fi and I wasn’t disappointed. Filled with a handsome alien prince who literally sweeps the heroine off her feet, out of her world, and onto his far away planet, the Prince’s Little Mate is full of surprises. It begins with Allison having to fulfill her end of the Auresian/Earth mating contract as she agreed to, in writing, but never actually thought she’d have to go through with, but it doesn’t end until after she’s explored some sweetly romantic ageplay with her loving new sometimes daddy, or discovered otherworldy steamy sex with her HOT always dominant lover, or gotten herself in all sorts of trouble by forgetting she’s not on earth anymore. Of course, that leads to a trip, or several, over his knee. There is also action, intrigue and an enemy plot that doesn’t seem to end here. Could there be more in store for this Auresian-Earth arrangement? I sure hope so. Well done and recommended.