The Princess and the Huntsman by Patricia Green 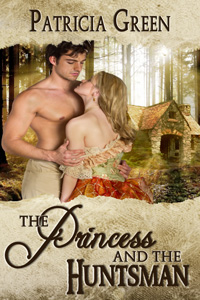 Though she was once as sweet as she is beautiful, since her mother’s untimely passing Princess Brandywyn seems to grow brattier with every passing year… until the day she is waylaid by a band of ruffians and dragged away into the forest. She is taken far from her home, but at last she is rescued from the outlaws by a simple huntsman named Tom and her life is changed forever.

Neither Tom nor anyone else will believe that a girl dressed in rags could be a princess, and without the slightest idea of how to get home, Brandywyn finds herself with no choice but to accept Tom’s offer to share his cottage. The feisty nineteen-year-old princess soon learns, however, that Tom will not stand for being treated as a servant. To her horror, Brandywyn discovers that arrogance will earn her a good, hard spanking on her bare bottom, and that more serious misbehavior will result in even more humiliating punishment.

In spite of his strict discipline, Brandywyn begins to feel things for Tom that she has never felt before… things that make her blush with shame. A princess should not dream of being stripped bare and taken long and hard by a commoner, yet dream of it she does. But what will her answer be if he asks for her hand, and what will come of them if her father finds her and returns her to the palace? Can a princess not only lust for a huntsman, but love him as well?

“There is no need to call me names. It will not change the matter.” He was frowning.

She rose from the bed and confronted him with hands on her hips. “You defy me? How dare you defy me, you lowly peasant!”

He faced her squarely and did not bend to a knee as a supplicant should. Brandywyn bristled. “You go too far,” he warned her. “I have done naught to raise your ire so. Back down or I shall show you the measure of my hand on your bottom.”

The spanking from Smith gave her pause. Was there no end to the mistreatment she would suffer? “I shall tell my father and he will have you gutted and stuffed with oats, like a holiday piglet.”

He continued to frown at her, towering over her like a near-to-toppling tree. “Do not push me.”

In fact, she did push him, with her two hands, though it did not move him even an inch. When that didn’t work, she slapped him full on the face. He turned his cheek slightly, but did not flinch. Brandywyn’s eyes rounded and her breath stilled as she saw the fury on his face. She instantly regretted her temper tantrum, but could not back down.

Tom grabbed her by the waist and bent her over his hip, hiking the shirt up to the small of her back; her bottom was bare, for she had no underclothes. “I am your guardian for the nonce,” he told her. “You will be polite!” With that, he set a resounding slap on her bottom.

“Ouch! Unhand me! Do you dare to strike a princess? You shall hang from a gibbet!”

“Hang me, then, but I shall have my pound of flesh first.” He commenced spanking her in earnest. Each blow jarring her through and through. Her bottom had just been beginning to feel better, too, but now, oh, now it was ailing once again. Tom continued to spank her, despite her protests, despite her squirming.

“Varlet!” Her protests were growing weaker and weaker as tears threatened to fall. And still, he spanked her again and again. “Please,” she finally pleaded. “Please stop. I shall be more kind.”

“I do not believe you,” he said, laying another half-dozen spanks on her fiery buttocks. The pain had rippled down her thigh to her knees along with his hard hand. “And I shall have my bed back this night!”

2013-11-02
+admin
Previous: Melissa’s Punishment Examination by Carole Archer
Next: Who is Jamie Miles?