Don't Miss
Home / Blog / The Princess and the Rogue by Jordan St. John

The Princess and the Rogue by Jordan St. John 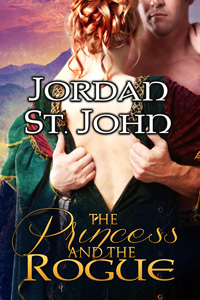 After she is betrayed by a trusted adviser, taken by force from her palace, and held prisoner by a ruthless countess, Princess Juliet wonders if she will ever see her home again. When a hastily planned escape leaves her lost in the depths of a dark forest, Juliet’s only hope for survival lies with Rand LaFlors, a notorious outlaw who takes it upon himself to aid her.

Though she is accustomed to giving commands rather than obeying them, the princess quickly learns that in this outlaw’s realm disobedience will result in swift chastisement. To her shame and amazement, being taken over Rand’s knee for a bare-bottom spanking fans flames of desire which rapidly burn out of control, and soon Juliet finds herself longing for this roughhewn rogue to claim her and dominate her completely.

Even as her passion grows into love, Juliet knows that she cannot stay in hiding forever, and both she and Rand will need all their wits and all their courage to overcome the traitors who have placed the kingdom in peril. But if they succeed and Juliet reclaims her rightful place on the throne, will the newfound bond between the princess and the rogue still hold fast?

“Well, princess, I think it’s time you saw how the common folk live. When they misbehave like you are doing, they are punished.” Rand looked at the old woman. “Mother Theda, with your permission?”

“What are you going to do to her?” said Theda.

“Nothing as drastic as a village flogging. I think a good, sound spanking will do,” said Rand, advancing on the girl.

“Don’t you dare!” screamed Juliet, back-pedaling to place herself out of reach of the determined outlaw.

But it was too late. The outlaw moved faster than Juliet believed possible and grabbed her wrist. She felt herself being tugged forward as the man made for a chair that he jerked away from the table with one hand. With the other, he held onto her wrist. Once seated, he toppled her across his lap.

Juliet fell forward, the earthen floor rushing toward her face. Miraculously, her fall was arrested before her nose touched the floor. Juliet panicked. She hadn’t been in this position since her mother had disciplined her years ago for some bit of impertinence. It was a helpless feeling, and Juliet felt mortified beyond belief. That a commoner, probably an outlaw, would do this to her, a royal princess, was unthinkable. But it was happening. And her mortification was just beginning. To her horror, she felt him lifting her skirt. The hem slid slowly up the backs of her legs until her drawers were exposed.

It was absolutely humiliating that a man should see her thus. But it was not over. Her mouth flew open in shock and she squealed at the indignity as she felt the awful man yank her drawers down, baring her bottom. A soft breeze caressed the denuded cheeks, and she blushed furiously, now totally humiliated. Another shock hit her system when she felt the outlaw’s palm touch her, patting her bottom casually. It sent a cold chill up her spine and she wriggled anew, protesting vociferously.

“Let me go! You have no right! I’m a royal princess!” Juliet kicked with all her might, but the outlaw held her across his knee with a steely grip.

“Now, princess. I’ll have a few answers. Who are you and what are you doing in my forest?”

“I’m a royal princess of Westvale. Release me at once!”

“All right, your highness. Have it your way.” Rand raised his arm and placed a hard spank square across the girl’s bottom. The sharp crack resounded in the dry enclosed space of the hut.

“Ow!” cried Juliet. But she barely had time to register the shock because a volley of brisk spanks followed that had her wriggling and kicking. The steady smacks from the outlaw’s rough palm stung her bare cheeks, raising the heat in her flesh. At first it was a tingle. Then it felt warm. But as the barrage of hearty spanks piled one on top of another, her bottom began to feel uncomfortably hot, as though she had backed too close to a stove.

Then the sensation drifted toward unbearable. The steady smack-smack-smack of the outlaw’s palm striking her wobbly bottom filled the confines of the hut. Juliet squealed. She pounded her fists on the dirt floor. She arched her back and squirmed furiously. Nothing helped halt the fiery blaze engulfing her bottom. He was spanking her on alternate cheeks, then sometimes right across the middle. He was relentless. After a while it all just spread to a scorching blaze in her behind that finally overwhelmed her.

2015-01-09
+admin
Previous: A Short Leash Is Off The Chain!
Next: Captured and Examined by Kallista Dane