The Professor’s Plaything by Normandie Alleman 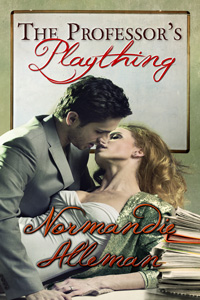 Twenty-one year old Colette Ellis has done plenty of daydreaming about Professor John McGill, but after a spur-of-the-moment decision to seduce him in his office turns her fantasies into reality, she is left longing for more.

She soon learns that this handsome academic can be as firm as he is passionate, and when her bratty behavior earns her a sound spanking she sees a side of him she never expected. Before she knows it, the beautiful young woman finds herself tied up at his mercy, naked, exposed, and more aroused than she could have ever imagined. As she grows closer to him, she cannot help but wonder how long this can last. Could John come to see her as more than just a naughty coed?

John has never fallen for a student… until now. There is something different about Colette, something that brings him alive in a way he has never felt before. Can he dare to hope that she is after more than just a fling?

She struggled to shake him off. “What are you doing?”

Planting one foot on the step above, he turned her over his knee and held her there with strong arms.

“I’m giving you that spanking you deserve,” he said through gritted teeth.

The palm of his hand landed on the edge of her ass. Thankfully, she wore a one-piece outfit that protected her doomed bottom. But it didn’t matter, because he just pushed the fabric aside, exposing her cheek and slapped the only place not covered by her romper.

She couldn’t believe he’d thrown her over his lap outside of her apartment. What if someone walked by? She’d die of embarrassment.

Suddenly his hand electrified her skin, and she forgot all about the neighbors. The blows stung, and then a dull pain mixed with the sting as he swatted her again and again. Yet with each jolt of pain, a slight thrill zipped through her.

The scent of his leather shoes filled her nostrils. Her vision seemed clearer as each blow sounded out like a clap of thunder. Fear and uncertainty bubbled up inside her, and she fought back tears. He would stop soon. He didn’t really want to hurt her, did he?

She wanted it to stop, but in a deep corner in the back of her mind, there was something about him spanking her that felt satisfying. Was it the excitement of being manhandled? Or was it the magnetic attraction to a man strong enough to correct her?

If she was honest with herself, she admitted she deserved a punishment. She had been a bad girl—in several ways. First, she had seduced him, and then she’d been testing his patience in the car. There was something almost magical about being punished for it.

Her ass cheeks burned, but John smoothed firm hands over them, tenderly caressing where he’d swatted her only moments ago. His touch soothed her aching skin, and she luxuriated in the attention, like a cat in a sun-drenched windowsill.

Gingerly, she rearranged her clothes and sat next to him.