The Ranch Contract: A Cowboy Daddy Romance by Dinah McLeod 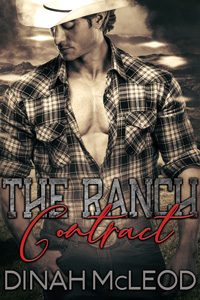 When Lora Harrison’s agent arranges a vacation for her on a working ranch, the beautiful, feisty young actress decides that a getaway couldn’t hurt, but she has no idea what is in store for her. Upon her arrival Lora discovers that guests are expected to help with the chores, but the real shock comes when she learns the hard way that the old-fashioned cowboy who runs the place will not hesitate to take down her panties for a sound spanking whenever he feels it necessary.

Nate Marsden could tell that Lora would benefit from a stern scolding and a bright red bottom within moments of meeting her, but when she falls asleep still snuggled in his lap after a well-earned punishment he realizes what she truly needs is a firm but loving daddy to keep her in line.

Though being chastised like a naughty little girl leaves Lora blushing crimson, she cannot help longing for Nate to take her in his arms, and when he claims her at last it is better than she ever imagined. But when the time comes to return home, will it mean leaving her new daddy behind?

Publisher’s Note: The Ranch Contract includes spankings and sexual scenes. If such material offends you, please don’t buy this book.

Nate pointed to the car. “If you don’t want to take your spanking on that bench right there, in front of anyone who cares to look, then I suggest we move this conversation to the car.”

“You can’t do that.” Lora felt a surge of anger of her own. “We’re back on my turf now. You can’t just spank me anytime you feel like it.” Nate did not look impressed, so she added a hurried, “Sir.”

“If you recall, I didn’t ask your permission the first time, and I won’t ask you now. You’re a little girl in need of a spanking, and you’re going to get one. What happens to us after, I’m not sure, but believe me when I tell you that you will be spanked.”

Lora was so mesmerized by what he’d said that she didn’t even think to be embarrassed by the fact that he wasn’t even trying to lower his voice. She didn’t try to argue. She put her hand on the door handle, but when he nodded his head to the backseat she moved to the back.

“Lucky you have tinted windows,” he noted as he closed the door behind them.

“Nate… you’re not really going to spank me here, are you?”

“Give me one reason I shouldn’t.”

She forced herself to look at him, to face his anger, and was surprised by what she saw. He was mad, yes, but what she saw made her think that it was for different reasons than she’d first assumed. His eyes were flashing, but she also saw the hurt she’d caused him. And… was that fear, lurking there beneath the stern expression? What did Nate have to fear?

“I’m sorry.” She reached for him, tenderly stroking the side of his face. “I didn’t mean to hurt you.”

“That isn’t going to get you out of a spanking,” he informed her, but his tone had softened.

“I’m not trying to get out of it. You’re right—I earned it, and I’ll take what I have coming. Just, not in the car, please?”

He considered her for several long moments. “Even though we’re on your turf?”

She winced at having her words thrown back at her. “I shouldn’t have said that.”

“Well, yes, but that still didn’t give me any right to speak to you like that.”

Nate stared at her, his expression pensive, before saying, “A dozen, right here, on the bare. If you stay quiet, no one will know.”

“I want you to have something to think about as you drive home.”

Was it her imagination, or did his pants bulge? When she laid herself over his lap, she knew it hadn’t been. He was hard, his cock pressing against her thigh as she waited to be punished.

Nate didn’t waste any time scolding her. Perhaps he was saving that for later. He only pulled down her jeans, tugging her underwear down with them, and administered quick, brisk spanks that made her bite down on her tongue until it hurt. His hard, callused hand worked its way down her backside, then back up, then back down again. Tears had gathered in her eyes by the time he was finished, but it had little to do with the spanking.

Then he was pulling her up, taking her roughly by the shoulders. “Don’t you ever do that again. If you disappear on me again—”

“I won’t,” was her breathy promise.

He kissed her then, his lips hard on hers, pressing her own mouth to yield. She did so, gladly, opening her lips, submitting to his tongue. When he pulled away, she was breathless, but she’d also never been more turned on in her life.

2019-09-14
Chris
Previous: Seeded: A Dark Sci-Fi Menage Romance by Loki Renard
Next: His for the Taking: A Dark Mafia Romance by Samantha Madisen