The Rancher’s Bride by Dina Chapel 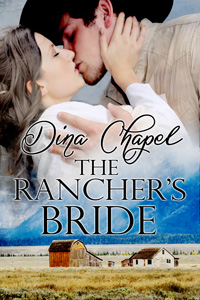 After Marie McConnell is abandoned by her family, she fears she’ll be unable to support both herself and the two orphan boys who have recently come into her care. When she finds work as a nanny at the home of rancher Frank Carter, a widower with an infant daughter of his own, she can hardly believe her good fortune.

To ensure that they are provided for, Marie passes off the orphans as her own children, but when her deception is discovered she learns the hard way that Frank will not tolerate dishonesty. After assuring her that the boys will remain welcome in his home, he puts Marie over his knee, bares her bottom, and spanks her to tears.

As the weeks pass and Marie throws herself wholeheartedly into caring for his daughter and the boys, Frank soon realizes that she is not only one of the prettiest women he’s ever met but also one of the kindest. Before long, he asks her to be his wife, and to his delight she accepts. But when a shameful secret from Marie’s past comes to light and threatens to tear them apart, can Frank prove to his new bride that she is his forever?

“We’re gonna have a long talk when I get back,” Frank shot over his shoulder as he dropped his hat on his head and ushered an angry Sarah out the front door.

Marie paced the entire first floor of the house waiting for Frank to return. She stopped only once, just long enough to go upstairs and check on the children. They were all sleeping soundly. She returned to the main floor and continued her pacing. A few minutes later, the front door opened and Frank stepped in, closing the door softly behind him.

He stood silent in front of the closed door for what seemed like forever to Marie, who had stopped her pacing when she heard the door open and stood at the doorway to the parlor watching him. He carefully removed his hat and hung it on one of the pegs by the door. He then looked straight at Marie, but said nothing, just started unbuckling his belt as he walked toward her.

Marie instinctively backed up, looking first from what his hands were busy doing, then to his face, trying to read his expression or see if he was going to say something. “Wh—what are you doing, Mr. Carter?” Marie had a good idea, but foolishly thought that if she played stupid, she might get out of it. She continued to back up as he continued to advance.

Frank had his belt all the way off now and was folding it in half just as Marie hit the wall behind her. In one swift move, Frank reached out and grabbed Marie’s arm, pulling her toward him as he sat down on the couch. She was over his lap the next second, her face against the cushion, and could feel her dress being worked up over her hips.

Marie was still angry, but her fear of that belt he had in his hand took precedence over the anger at the moment. He was fixin’ to spank her with that belt!

Frank then pulled her drawers down to her knees and, without any preamble, laid that strap of leather across her backside immediately.