The Ranger and the Runaway by Loki Renard 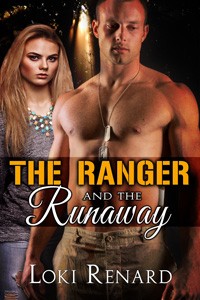 When eighteen-year-old Sandy returns to her hometown for the first time since running away from her horrible foster family, she doesn’t expect to find herself cornered and accosted by lowlifes outside a seedy bar. A burly, handsome Army Ranger coming to her aid is an even bigger shock, especially when he calmly informs her that she ought to be spanked for being in that part of town, then slips away into the night. Determined to see her rescuer again, Sandy gathers her courage and sneaks onto a nearby military base hoping to find him.

Protecting a woman in need is one thing, but Travis certainly can’t put up with a silly civilian girl trespassing on an army base just to see him. He starts to send her home with a stern lecture, but when she slaps him across the face and then makes a run for it, he decides it is time to teach this feisty girl a lesson she’ll never forget.

Within moments after he catches up with her, Sandy’s bottom is bare and she is getting the spanking of her life, a punishment which leaves her cheeks blushing, her bottom burning, and her body quivering with desire. Travis doesn’t hesitate to give her exactly what she needs, and she soon learns what it means to be taken hard, long, and very thoroughly by a dominant man.

Despite his better judgment, Travis cannot help falling for Sandy just as she has fallen for him, and before long their lust for each other is coupled with a passionate love. But when Sandy is kidnapped by a man set on using her to get to him, will Travis defy his commanding officer and take it upon himself to track her down and bring his girl home safe?

Travis wasn’t even close to being tired. She heard his heavier footsteps behind her and tried gamely for another burst of speed, but it was too late. Travis’ huge hand came down, grabbed the back of her sweater. He swung her around as if she weighed no more than a kitten.

“That was a mistake, little girl.”

Panting with the exertion of her dash for freedom, Sandy aimed a kick at his shin, but it never connected. He was wise to her now and he wasn’t going to give her a chance to hit him again. He sat down on a nearby tree stump and hauled her over his hard thigh. Before she knew what was happening, he’d started spanking her hard and fast, his palm landing with great whacking swats that jolted her entire body.

Sandy squealed and squirmed as hot pain blasted across her backside. Travis hit damn hard. He landed a dozen swats before even bothering to yank her pants down. His swats had hurt through denim; over the threadbare fabric of her cotton panties they were almost intolerable.

She shrieked and lashed out with feet, hands, and teeth but none of it connected with him. Her bottom was blazing hot and she was sure it had to be swollen to twice its usual size.

Somewhere in the spanking her panties disintegrated entirely, or maybe he’d just pulled them down. Either way they weren’t there anymore. Her bare butt was exposed to him and his damn hard palm, which was whacking her as tirelessly as if he were some kind of thrashing machine. Sandy had never experienced such a butt whipping in all her life.

Tears started to sting her eyes. She tried not to show how upset she was, or how much her ass was hurting. The very last thing she wanted to do was make even more of a fool of herself by crying, or worse still, coming.

2015-08-23
+admin
Previous: Bound and Initiated by Emily Tilton
Next: The Enslaved Princess by Rose St. Andrews