The Ranger’s Rules by Lily Harlem 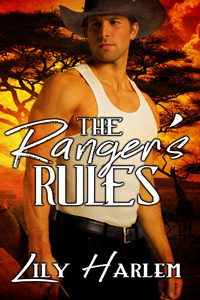 When she arrives at a remote game reserve in South Africa to work on her next project, wildlife photographer Casey Summers is more than a little annoyed that the only ranger available to escort her during her visit is gruff, ruggedly sexy Rhett Dawson. More irritating still, she is informed that for her own safety she will be required to stay with Rhett at his lodge.

Matters soon come to a head when Casey disregards one of Rhett’s rules and endangers herself in a risky attempt to get the best possible photograph, and before she knows it she finds herself over his knee for a long, hard spanking. When her reckless behavior continues, Casey quickly discovers that Rhett is more than ready to bare her bottom and punish her even more thoroughly.

Though being chastised in such a humiliating fashion infuriates Casey, she cannot deny her body’s reaction to Rhett’s stern dominance, and when he takes her in his arms and shows her what it means to be properly claimed and mastered she is left utterly spent and satisfied. But when a vicious band of poachers puts Casey’s life in danger, will Rhett be able to protect her?

Publisher’s Note: The Ranger’s Rules contains spankings and sexual scenes. If such material offends you, please don’t buy this book.

“Come here.” He held out his hands, palms up, and continued his steely stare.

She placed her hands on her hips. “Why?”

“You know why.” He clenched his jaw, and a tendon in his cheek twitched.

Fuck, was he really planning on spanking her again? Surely not. She’d learned her lesson, seen what a close call she’d had with being lion fodder. A spanking wasn’t necessary.

“I won’t tell you again,” he said, his tone almost as dangerous as she imagined a lion’s growl to be.

“You really think I’m going to let you smack my ass again?” She cocked one hip and scowled at him.

“You broke the rules.” Suddenly he reached forward and grabbed her wrist. In one sharp tug he yanked her close.

“Rhett, don’t be so Neanderthal,” she said on a gasp as she stumbled against him.

“I’m keeping you alive.” He tugged, hard, and pulled her over his lap.

The air rushed from her lungs as her chest connected with his thighs, and she rushed to push herself upright. “Get off.” But once again it was no good, he held her firm.

“Keep still, damn it.” He dragged her body closer to his and secured his arm over her shoulders.

“Jesus, what the… Rhett,” she said as her hair hung over her face and she gripped the chair and his leg.

Then, much to Casey’s horror, she was aware of fresh air washing over her butt as he pulled her small black knickers down her thighs.

“I’ll… you… how dare you.” She tried in vain to sit. Kicked her legs, and bashed his calf with her fist. A spank was one thing, but stripping her, exposing her… she’d have him in court for this.

A sharp stinging slap covered her left buttock. She cried out in surprise even though she’d known it would be coming. She guessed she’d still been recovering from the shock of him baring her ass.

Another spank, harder this time, on the other cheek.

“Ouch… fuck!” A now familiar swarm of humiliation burned through her. It brought moisture to her eyes and curled her toes.

The next two smacks had her crying out again. Yes, they hurt, but it was also fury, mortification, and shame that had her yelping. Why was she letting him do this? “I demand you let me go, now.”

He smoothed his palm over her ass cheeks.

She held her breath, strangely enjoying the sensation of his palm rubbing over her patches of heated skin. For a moment time seemed to freeze. His hand on her, caressing and soothing, filled her world.

2017-07-15
Chris
Previous: His Firm Direction by Alexis Alvarez
Next: Her New Masters by Rose St. Andrews